The Shrouded Road: A Friday Devotional 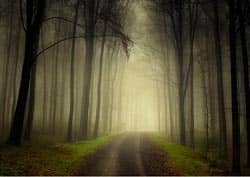 Now an angel of the Lord said to Philip, "Go south to the road -- the desert road -- that goes down from Jerusalem to Gaza." So he started out, and on his way he met an Ethiopian eunuch, an important official in charge of all the treasury of Candace, queen of the Ethiopians. This man had gone to Jerusalem to worship, and on his way home was sitting in his chariot reading the book of Isaiah the prophet. The Spirit told Philip, "Go to that chariot and stay near it."

Then Philip ran up to the chariot and heard the man reading Isaiah the prophet. "Do you understand what you are reading?" Philip asked.

"How can I," he said, "unless someone explains it to me?" So he invited Philip to come up and sit with him.

The eunuch was reading this passage of Scripture:

"He was led like a sheep to the slaughter,
and as a lamb before the shearer is silent,
so he did not open his mouth.
In his humiliation he was deprived of justice.
Who can speak of his descendants?
For his life was taken from the earth."

The eunuch asked Philip, "Tell me, please, who is the prophet talking about, himself or someone else?" Then Philip began with that very passage of Scripture and told him the good news about Jesus.

As they traveled along the road, they came to some water and the eunuch said, "Look, here is water. Why shouldn't I be baptized?" And he gave orders to stop the chariot. Then both Philip and the eunuch went down into the water and Philip baptized him. When they came up out of the water, the Spirit of the Lord suddenly took Philip away, and the eunuch did not see him again, but went on his way rejoicing. Philip, however, appeared at Azotus and traveled about, preaching the gospel in all the towns until he reached Caesarea.

Philip's journey is marked by faith and faithfulness.  He receives a command to "go south to the road," but he is not informed of his ultimate destination or purpose. He does not know where he is going, nor why. But he knows for whom. This servant travels for his Lord. Philip soon discovers the Ethiopian eunuch. Yet, even then, the purpose is not made explicit. God simply says, "Go to the chariot and stay near it." Philip is not commanded to find and evangelize the eunuch. Philip does so, because he attuned to God's heart -- his faith leads to the fulfillment of God's purpose.

Sometimes we want answers to all our questions before we go. We want to know the why's and where's. The most important question, however, is who. Who is the Lord? Is he trustworthy? Does he deserve my complete allegiance and confidence? If we are clear on this matter, we have clarity sufficient for our journey.

Philip's journey of faith contributes to the Ethiopian's journey to faith. In verse 31, the eunuch's recognition that he needs someone to "explain" the Scriptures is far more than a request for further information. This particular word, which is here translated as ‘explain,' entails the idea of leading or guiding a person to a destination. This same word is used to describe the Holy Spirit who "will guide you into all truth" (John 16:13). The eunuch doesn't need more facts thrown at him. He deeply desires for someone to walk with him to the destination of faith. The Spirit has come for the purpose of leading to truth in Christ, and he seeks to use us in this same fashion. So, Philip guides him through the story of Scripture beginning with the passage in Isaiah and leading to the good news about Jesus. Their journey along the road is a physical metaphor for the spiritual reality that ought to characterize Christians who joyfully walk with others toward Christ.

As you encounter people in your lives, their greatest need isn't for more information about Jesus, but for living guides. God is already at work in people's lives. We must come alongside them, walk with them, and help them come to the destination of faith. Who is someone for whom you can do that?

You, O Lord, are the good shepherd. Though we may not know where our journey leads, we trust in you and ask for the grace to follow faithfully. Let us go forth with full assurance that, while we may lack clarity, you are perfectly wise and good in your dealings with us.