Why Do Mormons Care about Mesoamerica? 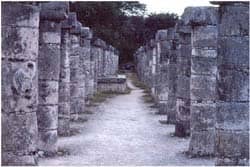 For the modern LDS interest in Mesoamerica, there are two important questions: Why look there in the first place, and why continue to examine Mesoamerica?

Mesoamerica holds some attractive possibilities as a location for the Book of Mormon. It represents a complex culture and perhaps most importantly, is the only location in the Americas where there was an indigenous writing system. The correlation between the Book of Mormon as a written record and the only known people with a writing system made Mesoamerica a logical place to look.

In 1984, John L. Sorenson published An Ancient American Setting for the Book of Mormon, which lays out the essential arguments for a correspondence between Mesoamerica and the Book of Mormon. He began by carefully examining all of the statements in the Book of Mormon related to geography (see his volume summarizing these here.) The most important aspect of such descriptions would be distance, but distance is always measured in terms of time (a number of days' journey) rather than in spatial dimensions.

Taking a constant for a day's journey culled from historical accounts of how far different groups might travel in a day, Sorenson constructed a hypothetical map that included both the relative layout of locations and the plausible distances between them. The result was a land where most of the described action took place within approximately 600 miles from north to south, and perhaps 300 miles from east to west. Taking those dimensions and the descriptions of topography, hydrology, and climate, Sorenson laid the Book of Mormon events on a map of Mesoamerica and found a reasonable fit.

Once the geography appeared to fit, the next question was whether the history and culture also fit. Sorenson examined the known history of the peoples of Mesoamerica and their time periods, and finds that not only were there people in the appropriate places at the right time, but that there were archaeological remains in the posited city locations that carbon-14 dated to the time the Book of Mormon claims that there were cities in those locations.

The apparent success of Sorenson's examination of the correlation between Mesoamerica and the Book of Mormon has led to further investigation of the connection.  Most correlations between a given text and a proposed geography have unanswered questions and possible contradictions (as the various schools of biblical archaeology may attest). The same may be said for the Book of Mormon.

The first possible issue with the correlation comes from multiple assumptions that are made about the text that must be explored rather than simply accepted. One such assumption is that by placing the Book of Mormon in Mesoamerica, LDS scholars are suggesting that the Book of Mormon describes the rise of Mesoamerican populations. There certainly have been LDS writers who have suggested that, but the text does not require it. Archaeologists are correct in insisting that the roots of Mesoamerican culture run deep in the New World and need not be explained by the infusion of Old World peoples (and the jingoistic assumption that culture could only have come from such an infusion).