Hey, Are Those Miracles Real? 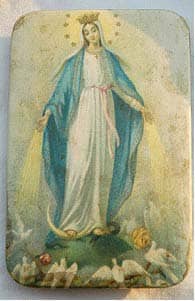 It happens every year. I'm walking past the library, or some other building, loaded with windows, and one of my students bursts out the door and runs toward me with eyes dilating, hair frazzling, nerves fraying, arms waving, and body quaking to ask, out of breath, did these things really happen?

"Things" referring to the miracles and visions we have been reading about in the 16th-century autobiography assigned that week.

What the student means is this: did the miracles or visions happen in an objective sense, so that if I or other witnesses would have been there we would have seen them too? Or was the author just nuts? For how else to explain that she saw Jesus everywhere she went, including at the breakfast table?

The autobiography in question this year was written by Ana de San Bartolomé, a Spanish nun who lived from 1549 to 1626 and who, toward the end of her life, at the behest of her confessor, put her spiritual odyssey down on paper. Or in Mormon lingo, she wrote her personal history.

A lot of other nuns and mystics did the same thing, including the most famous authors of this genre, St. Teresa of Avila and Ignatius Loyola. Most are chock full of visions and miracles and the otherworldly, which makes perfect sense when you understand that the point was to show God at work in their lives. But students, including Mormon students, are puzzled about how to read them. More specifically, they want to know, were the fantastic events described "real"?

My job isn't to answer that question, of course, but to suggest approaches to such accounts, and especially to draw approaches out of the students. After all, I'm not sure that my reading is any more right than theirs. I'm also not sure, after years of exposure to such accounts, that the "reality" of the miracles or vision is the right question to ask, at least in the way "real" is usually understood.

It's a perfectly understandable question, of course, for people of various backgrounds. I asked it myself when I first read some miracle stories, because I had learned most of my life through word or cultural osmosis that the heavens were closed until around 1820 and that most people before and even after that date thought the same thing. It didn't take long to figure out that more than a millennium of Catholics certainly did believe in miracles and visions, but still, they couldn't actually be "real," could they?

My response was similar to what my students still go through, though they might be a little more inclined to view such experiences as "partially real." As in "partially true," or a "portion" of the truth or the spirit. Just not the full deal. Just God granting a tiny sliver of light to keep people going until the full light emerged. (I'm not guessing here, as this is the idea that initially prevails in the discussion of such readings.)

When I was a student, I began to open up to the idea that other believers' claimed encounters with the divine might be just as real as my own, thanks largely to an old religion professor at BYU named Burt Horsley. He must have been 65 or 70 by the time I took his class on Christian History, but he had a mind far more supple than those of his returned-missionary students, and a grounding markedly different from that of other religion professors I'd known. For he calmly responded with contrary evidence whenever some student confidently pronounced that only someone holding the priesthood could possibly receive a genuine vision, or whenever someone scoffed at the claim that the bones of Peter might actually lie in St. Peter's in Rome.

His openness to the reality of the experiences of other believers was reinforced when I started reading for myself thousands of claimed miracles from the 16th and 17th centuries, especially when I read them in their original handwritten form. Such documents were produced in mountainous quantities by the Catholic hierarchy, which went to a lot of trouble and expense to interview witnesses, doctors, and the alleged beneficiaries of every claimed miracle and vision because the Church wanted believers to believe only in the "true."

Sorting out the true from the untrue was trickier than it might seem. It came to focus on distinguishing between events that had either natural or supernatural causes. Yes, nature too was a miracle, said Augustine, for it was created by God, but when God worked through the ordinary course of nature most experts regarded Him as working only indirectly. What we have come to call miracles involved events in which God could be said to work directly, or in other words, supernaturally ("above nature").