"Blessed are You, L‑rd our G‑d, King of the Universe, who directs the footsteps of man." 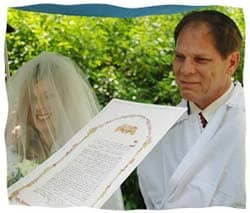 Judaism teaches that the way to begin each morning is by reciting a blessing giving thanks to G‑d for preparing the road ahead for our life's journey. As a convert to Judaism this blessing holds particular significance to me. My journey has taken me from my grandfather's primitive Baptist Church in Arkansas, to an ashram in the Catskills, and finally to Orthodox Judaism.

Christianity never took hold on me, even though my grandfather was the pastor of the church my family attended. I daydreamed and played albums in my mind during the hour that my grandfather was in the pulpit preaching. It wasn't that I lacked an interest in connecting to G‑d; it was that I wanted an unadulterated relationship with G‑d that did not involve praying to a human being.

When I was thirteen, while reading a book on various religions, I felt as if a spark had been lit in my soul, and I became consumed with a love for G‑d and a desire to connect to my Creator. It would be another two years before my longing and search for connection would lead me to explore Judaism.

I remember the joy that I felt when at the age of fifteen I went to the library and discovered the section on Judaism. For some inexplicable reason I assumed that my parents would be pleased with my newfound reading material; needless to say, they were not. My mother told me that I was not allowed to bring those books into her house. However, I would not be deterred and I continued checking out Jewish books and began hiding them and reading in my closet. (It has literally taken me twenty-five years to understand my mother's point of view, and to see that she was justified in her stance against my bringing home books about a religion with beliefs that were in contrast to her own. Undoubtedly, I would be upset if my daughter brought home books that would help her to seriously explore a religion outside of Judaism.)

Over the years my parents had to adjust to the reality that their youngest daughter was religiously rebellious. While other teenagers were out on Friday night dates, I was lighting candles, reading my "Jewish" bible, and lying on the living room floor pinching myself to atone for my sins. I knew that pinching oneself was probably not a Jewish custom, however, in my limited imagination that was the only method I could come up with to tell G‑d that I was truly sorry for everything that I had done wrong in my fifteen years on Earth.

During the next four years, I continued to read about Judaism and wanted to convert. At the time, conversion was not in my vocabulary. I simply knew that I wanted to live as a Jew.

When I was nineteen, I moved to Atlanta to be with my sister who was attending Emory University. I remember one night during that time period I was watching a special on PBS about religious Jews. As I was watching the special, I told myself that I would never be allowed into that special group, and that I should forget about converting. I am not sure what it was about that documentary that deflated my aspirations for conversion; I just remember the hopeless feeling of believing that I would never be accepted as a Jew.

Having given up hope that conversion to Judaism would ever be a possibility, I became increasingly depressed and dissatisfied with my life. I applied to college, was accepted, and chose piano as my major as I had taken piano lessons for many years.

I respected and trusted my piano teacher, so one day during a lesson I confessed that I was depressed and needed direction in my life. She invited me to attend a program at her meditation center. I was somewhat hesitant, as I was a girl from Arkansas who for years had dreams of becoming Jewish. I had never entertained the least bit of curiosity about Eastern spirituality. However, out of sheer desperation, I agreed to go with her to a program.

At the meditation center, I entered a darkened room with candles and incense burning. Men and women, most of them appearing to be in their early to mid forties, sat barefoot on the floor facing an empty chair with a large picture of a beautiful Indian woman hanging above it. I was later told that the woman in the picture was their guru, who resided half of the year in India and the rest of the time in the Catskills, in upstate New York.