Beauty and the Beard: Facial Hair, Film, and Mormon Culture 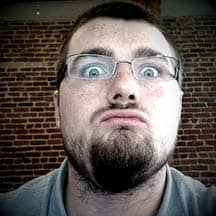 This post will examine all three of The Work and the Glory films. For the sake of clarification, only the first, Russell Holt's The Work and the Glory, will be referenced by that title. The two sequels, both directed by Sterling Van Wagenen, will be referred to by their subtitles -- American Zion and A House Divided, respectively. It should also be noted that, while a few comparisons will be made between the films and the books by Gerald Lund, this criticism focuses uniquely on the films.

With the publishing of The Work and the Glory: A Pillar of Light in 1990, Gerald Lund began what has become the best-selling series of LDS historical fiction to date. The nine-book series has sold over two million copies, and the book on tape has reportedly also sold exceptionally well. But the series received what seems to have become the ultimate validation in this day and age when Larry H. Miller announced in 2003 that it would be adapted into a feature film. "With this much of a following," Miller stated," and with the significance of the events the series examines, it's time to make this historical story into a quality feature film."

The magnitude of the undertaking was underlined by the involvement of Deseret Books' own president and CEO Sheri L. Dew, who personally represented the interests of both author and publisher. Even then, Lund was brought on board as a script consultant. "We don't underestimate the magnitude of this film project," said producer Scott Swofford. "We are properly funded, have a book that flows easily into a screenplay, and have collected the most qualified talent to produce what we believe will be a film of excellence. This story requires that." Added Dew, "The Work and the Glory series is one-of-a-kind. As the publisher of this series, we have complete confidence in the integrity of those producing this movie and that the integrity of the books will be maintained while crafting an artistic and first-rate movie. Everyone involved with this production epitomizes excellence and quality. This movie is going to touch many lives."

The purpose of this critique is to examine the story thematics in light of the need to tailor a written work to the demands of the visual consumer, which the films do largely by reducing or replacing outright depictions of evil with the presence of facial hair.

In the audio commentary for The Work and the Glory, Holt laments giving actor John Woodhouse (playing the part of Will Murdock) a beard, calling the decision both "unconscious" and "stereotypical." It is this statement, particularly this idea of the stereotypical "evil beard," which necessitates a closer look not only at Holt's work within the series, but Van Wagenen's as well.

Much like the white hat/black hat myth of the Western (a stereotype that derived not from actual practice but from a children's poll), the "evil beard" has no firm roots in American iconography. Hitler's square mustache now lives in infamy, even though it was preceded and popularized by the likes of harmless funny-men such as Oliver Hardy and Charlie Chaplin. Joseph Stalin's handlebar did nothing to stymie the sex appeal and good guy marketability of Tom Selleck or Burt Reynolds. Vaudeville comedian Groucho Marx's grease paint mustache (combined with his eyebrows and glasses) has become entrenched as a joke shop novelty. Cinema's first major sex symbol of the sound era was pencil-thin mustachioed Clark Gable, he of Gone With The Wind and It Happened One Night immortality.

Furthermore, an appeal to some of the most iconic of American films offers contradicting evidence to Holt's claim that the beard is stereotypical of evil. In George Lucas' Star Wars prequels, the beard is symbolic of Obi-Wan Kenobi's ascension from ego to super ego as a benevolent Jedi, while the Emperor remains clean-shaven throughout. Indiana Jones frequently battled immaculately shorn villains with a rustic growth of his own. In both cases, beards were symbolic of a certain natural earthiness -- a healthy progression in the case of Obi-Wan and the mark of a survivor in the case of Indy.

Even feature animation, that bastion of moral values so eagerly consumed by Mormon culture, produces no clear stereotype. For every Captain Hook, Jafar, and Bowler Hat Guy, there's equally a Gaston, Frollo, and Syndrome. What's more, the righteous Prince Charmings, Aladdins, and Tarzans are balanced by the Gepettos, Merlins, and six out of seven dwarves.