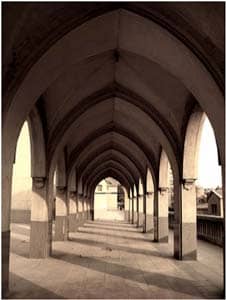 In its section on music, the Catechism of the Catholic Church quotes St. Augustine: "How I wept, deeply moved by your hymns, songs, and the voices that echoed through your Church! What emotion I experienced in them! Those sounds flowed into my ears, distilling the truth in my heart. A feeling of devotion surged within me, and tears streamed down my face -- tears that did me good."

As a former Lutheran pastor who is now Roman Catholic, I am sorry to say Augustine's wonderful words do not describe my experience with worship in the Church. Though at times I have been on the verge of tears, that was due to feelings of despair and not devotion. Far from drawing me into the Church, the manner in which the Mass is celebrated in most parishes constituted, in the end, the greatest stumbling block to my conversion.

My trek to Rome began in earnest the day I read in Lutheran Forum Pastor Leonard Klein's condemnation of the Evangelical Lutheran Church in America's practice of funding abortions: "Real churches do not kill babies." Prior to this point, I had never seriously considered becoming Roman Catholic. After all, I was a fourth-generation Lutheran pastor -- happy to be a pastor and steeped in the traditions, theology, and ethos of Lutheranism.

Yet, as I read Klein's editorial, I was like a person coming to terms with the terminal illness of a loved one: I saw that my church body had fallen captive to "the culture of death" and that I had no choice but to leave. I had for some time ceased to view Lutheranism as a necessary "corrective" to Catholicism and, for years, had viewed the Roman Catholic Magisterium, and especially this Pope, as the keeper of the faith for all of Christendom. Therefore, for me, the only true option was to become Roman Catholic.

I began to read -- papal encyclicals, Vatican II documents, the Catechism of the Catholic Church, theologians such as Louis Bouyer, Hans Urs von Balthasar, and Joseph Cardinal Ratzinger. I conversed with other Protestant pastors who had become Catholic and with priests who had grown up in the faith -- all were eager evangelizers. The more I read and talked, the more convinced I became of the truth of the Catholic Church's teachings and doctrine.

I had now arrived at the doorstep of Lumen Gentium 14: "Whosoever, therefore, knowing that the Catholic Church was made necessary by God through Jesus Christ, would refuse to enter or to remain in her could not be saved." Even if I was willing to take a chance with my own soul, I had three small children to consider and that concentrates the mind. At this stage, I was a reluctant convert still wrestling with giving up my ordination, but I took comfort in C. S. Lewis' insight: "The hardness of God is kinder than the softness of men, and His compulsion is our liberation." God's compulsion was operating through my conscience and driving me into the arms of the Church. I now set out with hopes of experiencing the teachings and beliefs of the Church through Catholic worship -- the Truth made manifest, if you will.

The first thing I noticed upon entering the lobby of our local Catholic parish, St. Mary's, was the absence of a coat rack. Catholics, unlike Lutherans, worship with their coats on, which gives the impression they are making an obligatory pit stop. After Mass, most do not linger to talk but instead race to be the first out of the parking lot. Obviously, becoming Catholic was going to require a few adjustments, including giving up that Protestant feeling of belonging to a close-knit community.

The sanctuary of St. Mary's is devoid of statues, and the pews are arranged in a semi-circle. We chose to sit in the side pews, and I soon discovered the problem with this configuration: I spent most of Mass staring at the parishioners across from me -- observing their dress, their mannerisms, their parenting skills. This became an especially great temptation during the homily, which lasted twenty minutes and was delivered without manuscript or notes. My father, who for part of his career taught homiletics, warned me: "If you are going to preach without a manuscript, you actually have to be much better prepared." Many priests don't seem to know that rule.

I might have put up with the preaching, but the music was another matter altogether. This parish had well over a thousand members, so I could not understand why it did not have a choir. Instead, we were led in song by a large, well-dressed, perfectly coifed woman who stood at the lectern and sang with great emotion off-key into a microphone. The alternative to the song leader was the intensely earnest folk group with their three guitar chords. My first call as a pastor had been to a small rural parish with an average attendance of ninety and a choir of five. It boggled my mind to think the music and singing in that parish was superior to what I was now experiencing.