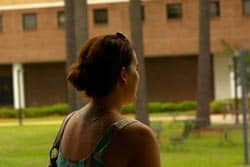 "When a student at a faith-based institution gives up her faith, convinced that it's intellectually untenable, has that institution failed? Has it succeeded? What if that happens at a secular institution?"

This is one of the questions posed for discussion at a conference I'll be attending today at Westmont College, an evangelical Christian school in Santa Barbara.  As I prepared for this meeting, I considered the many theological conversations I've had with students over the years, when I worked as an ecumenical Protestant campus minister at Stanford, and now as associate dean of religious life at the University of Southern California.

Students continue to come through my door, one after another, realizing that the dogmas and doctrines in which they were raised do not make sense to them after they have been exposed to a broad academic university curriculum.

Students continue to come through my door, one after another, realizing that the dogmas and doctrines in which they were raised do not make sense to them after they have been exposed to a broad academic university curriculum.  They take literature and history courses, and realize that the Bible and other religious texts were written by real human beings who had axes to grind, points of view colored by their contexts.  They study the sciences and grow increasingly uncomfortable with religion that demands belief in the supernatural.  They meet gay and lesbian people who would have been shunned or closeted in their home churches, and realize that they are just folks like themselves, expressing the sexual orientation with which they were born.  They get to know practitioners of other religions, and discover that their faiths are as good for their followers as their own is for them.

They realize that the form of religion in which they were raised was weak.  It was built on superfluous doctrines that were outmoded and indefensible, instead of being built on the enduring foundation of universal compassion and spiritual communion.  It was a dogmatic house of cards.  Pull out one card - say, the belief that all other religions are false - and the whole structure comes tumbling down in a pile.  When students find themselves standing in the middle of this pile, they arrive at a spiritual crossroads.

These students show up at my door, often with the question:  "Now what?"  By the time they make it to my office, they are not likely ever again to believe the doctrines they were taught as children.  There's no putting Humpty together again.  So the "now what?" question is a tough one for them.

Often, they are traumatized by knowing that their families, and often their entire communities, consider them to be headed for eternal damnation, having lost their salvation by questioning or abandoning their received doctrines.  They become second-class citizens back home as a result of the awakening that comes from a liberal education.  This can be devastating.  My role is to be a supportive listener and gentle guide as students come to terms with this painful reality.

For many students, the "now what" moment leads to a total rejection of religion.  They see the absurdities in the dogma, they see the way that religion poisons their closest relationships, and that is enough to turn them off to the subject for a long time - or maybe forever.

For others, the awakenings that come with a liberal education are powerful means for deepening their understanding and commitment to their religion.

But for others, the awakenings that come with a liberal education are powerful means for deepening their understanding and commitment to their religion.  They discover that there is great wisdom and compassion in the religion of their upbringing - once they release all the doctrinal chaff that has built up around it.  By letting go of supernaturalism, sexism, homophobia, scriptural literalism, and religious exclusivism, they are liberated to get down to the core of faith and embrace the challenge of living out its core values.

They discover that Jesus wasn't asking us to believe the unbelievable, but rather to love the unlovable - something much more worthy of committing one's life to attempt.  They discover that they can be full-strength, serious Christians without accepting everything that Christians have said or done through the centuries, without needing to follow every exhortation found in the Bible.

They discover that just because something in the Bible didn't really happen, that doesn't mean it can't be true.  They discover that when they stop reading the Bible as if it was a rulebook for life, or a geology or history textbook, it opens up with rich interpretive possibilities.  Many of its stories may be myths, but that does not devalue them.

They are myths that can open the soul to new levels of spiritual awareness and social conscience.
Article Continued On Next Page
Page: 1 of 2
3/1/2010 5:00:00 AM
About