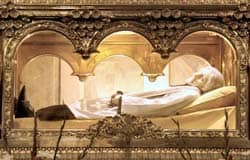 One evening, while surfing YouTube, I stumbled across a five-part slideshow on the incorrupt bodies of saints. Having once been a soul mate to television's ghoulish Wednesday Addams, I launched "Part One," expecting to get halfway through before my maturing tastes demanded I resume searching for the clip where Triumph, the Insult Comic Dog, humiliates the geeks at the Star Wars premier.

To my surprise, the spectacle held me in thrall. In every dead face, sanctity intersected with human nature in some unique and memorable way. St. Jean-Marie Vianney's fine features hinted at a painful sensitivity. With her mouth half open, St. Veronica Giuliani looked as though she were savoring one of her ecstatic visions. The puppy fat on the face of the child Beata Imelda Lambertini spoke of youthful good health and a life unexpectedly cut short.

But some of the other holy cadavers looked distinctively, well, cadaverous. With skin the color and texture of fine leather and both nose and lips gone, St. Virginia Centurione Bracelli looked like any of the mummies I'd seen in the British Museum. Seated upright, her face and hands blackened, St. Catherine of Bologna looked as though she'd paid a terrible price for nodding off with a lighted cigarette.

How incorrupt did an Incorruptible have to be, anyway? I wondered. Physical decay had been on my brain in the weeks since my thirty-seventh birthday -- weeks I'd spent playing hooky from the gym. In the softening of my deltoids, I felt the promise of my own physical decay. Any formula for eternal youth sounded good -- even goodness.

So, I began checking around on the Internet, which turned out to be a minefield of misinformation. Saintly incorruptibility is an obscure doctrine; only one researcher, Joan Carroll Cruz, has studied it systematically. Once Cruz's book, The Incorruptibles: A Study of the Incorruption of the Bodies of Various Catholic Saints and Beati, arrived from Amazon, I began to appreciate the phenomenon for its strangeness, its resistance to precise definition, and its knack for confounding expectations.

For starters, the so-called Incorruptibles follow their own schedule. They may last for centuries, or only for decades. St. Francis Xavier's body endured multiple exhumations, translations -- that's Church jargon for reburial in a different grave -- and dismemberments at the hands of relic-hunters. For over a century and a half, its intact state continued to astonish examiners. Then, at some point, it dried out, shrank somewhat, and mysteriously lost one of its toes. St. Charbel Makhlouf exuded a bloodlike fluid, reputed to have healing properties, for over fifty years after his death. But when examiners re-opened his casket in 1967, they found he had fallen away to bones and gristle.

According to Pope Benedict XIV, who spelled out the standards in 1734, an incorruptible body must be lifelike -- in flexibility, color, and "freshness" -- and must remain so for many years after exhumation. But these criteria seem to be at least as flexible as the bodies they apply to. Just because a body has escaped putrefaction doesn't mean it will look primed to sit up and start chanting matins. Even the skin of non-decaying corpses turns dark from exposure to oxygen, and draws tight across the bones. Although such a body's state of preservation, which often extends to its organs, is impressive from a scientific point of view, my layman's gut response is: Wow, St. So-and-So is very, very dead.

All natural or wax?

When confronted with a body that is technically incorrupt, but not very aesthetically pleasing, the Church has alternated between two approaches: 1) go all natural; 2) wax. The bodies of Saint Maria Magdalena de Pazzi and Saint Eustochia Calafato could serve as poster children for the laissez-faire look. Although discolored and drawn, both faces show real character. Picturing them alive going about the daily business of sainthood doesn't tax the imagination at all.

By contrast, the wax-covered faces of Saint Jean-Marie Vianney and Saint Bernadette Soubirous look exactly the way I would want incorrupt saints to look: like perfect sleeping beauties. But upon learning of the boost they got, I couldn't help feeling let down -- more on the saints' behalves than my own.

Reports of miracles draw humorless myth busters like flies. It seems terribly unfair to put any saint in a position where an asterisk might attach itself to his name.

More confusing still, the relics of some saints -- including some former Incorruptibles, and others who never made the cut to begin with -- rest in wax effigies that look more body-like than real bodies. In fact, the faces of St. Veronica Giuliani and Blessed Imelda Lambertini, which both struck me with their expressiveness, belong to wax mannequins.