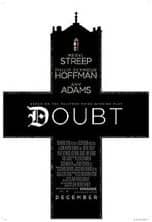 The Pulitzer Prize-winning play that the film Doubt is based on bears the subtitle "A Parable," which begs the question: what's it a parable about?

The priests and nuns of this tale are people, to be sure, but they're also symbols, while the axis around which the story turns is ecclesiastical power. John Patrick Shanley's first film since the Tom Hanks/Meg Ryan vehicle Joe Versus the Volcano addresses many of the American Catholic Church's gravest concerns of the last 50 years -- most obviously the abuse scandals, but also the shrinking priesthood, the changing role of women, the civil rights movement, and the cross-pollination of secular and religious cultures.

Set in a Bronx Catholic school in 1964 (taken from Shanley's own childhood experience), the school's principal, Sister Aloysius (Meryl Streep), is almost comically tyrannical. The parish priest, Father Flynn (Philip Seymour Hoffman), is unconventional, almost hip, peppering his sermons with jokes and hugging students. The setting is ripe for tension, though it doesn't explode until Sister James (Amy Adams) notices Donald Miller (Joseph Foster), the school's only black student, acting strangely after a private meeting with the priest.

After expressing her concerns to Sister Aloysius, the principal reaches a bleak conclusion about what has happened: Flynn gave the boy communion wine and then molested him. When the two nuns confront Flynn, he grudgingly offers a tight-lipped explanation: Donald was caught drinking communion wine, and Flynn, fearing that he might be removed from the altar boys or even expelled, hoped to keep the matter quiet. The boy had expressed interest in becoming a priest, and Flynn didn't want the punishment to deter him from pursuing that goal. The message, or the mystery, is clear: Sister Aloysius' prying may have deprived the Church a potential leader. But if she's right, if Father Flynn is a sexual predator, her ends -- protecting other children from harm -- justify her means.

On the surface Doubt is a torn-from-the-headlines story about the abuse scandals that have rocked the Church over the last decade. At its heart, however, Shanley's story is a parable of Vatican II. It's critical here to point out that Doubt is set in 1964, in the midst of the Second Vatican Council; in that context the story reflects the Church's growing pains. Sister Aloysius is the old church, authoritarian and inflexible. Father Flynn is the new order, the jocular, friendly face of a Church whose pastors no longer turn their backs to the congregation.

All of this is humorously encapsulated in a scene in which Sister Aloysius counsels the novice Sister James to hang a picture of a pope on the blackboard so she can watch her class reflected in the glass. Sister James doesn't have a picture of Paul VI, or even John XXIII, so instead she puts up a picture of a dour Pius XII. Sister Aloysius draws her power -- the eyes in the back of her head -- from the pontiff of an earlier era, the last pope before Vatican II. The film excises an explicit reference to the Council made in the play, but it's still clear: Doubt paints a picture, from the cheap seats of the Bronx, of the Church in mid-transformation.

But things are even more complicated than that, as the story is also an elaborate critique of the way power is wielded in the Church -- and the fact that Vatican II managed to change very little.

Sister Aloysius is paralyzed by her position, unable to do anything about Father Flynn directly because the Monsignor will protect him. In their final confrontation, Father Flynn reveals this reliance on male hierarchy as he admonishes her: "You have taken vows, obedience being one! You answer to us!" He then attempts to reposition himself between her and higher powers by evoking the language of the confessional, asking her to ponder her own sins rather than his. He tries to reclaim his place of masculine privilege over her, but within seconds she has done the same to him: she knows that every priest was once a nun's student, and speaks to him as she would a student who has been sent to her for discipline.

But as tempting as it is to see this as an embodiment of the cliché about women holding the real power in the Church, the story, like the real world, doesn't bear this out. In the end Flynn suffers no consequences from Sister Aloysius's suspicions. The changes of Vatican II, embodied in Father Flynn's cheerful face, are simply whitewash. The real power structure -- the hierarchy that continued to protect known predators for decades -- is still in place. Sister Aloysius's power within her domain is absolute, but the borders of that domain are unchanging.