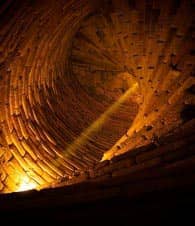 Since the beginning of human history, we have struggled to articulate our understanding of the Divine. How does one describe the indescribable? We decided to ask a dozen bloggers across faith traditions to answer that very question: Who (or What) is God? And to make it even more interesting, we challenged them to do it in 100 words or less. What follows are their evocative responses.

Join the challenge and share your own "100 words on God" below.

Hussein Rashid, a professor at Hofstra University and Associate Editor at Religion Dispatches. He blogs at www.husseinrashid.com.

Joanna Brooks, an award-winning author and scholar of religion. She blogs at askmormongirl.com and mormonmatters.org.

Patrick Aleph, the founder of PunkTorah.com and a writer for MyJewishLearning and Jewcy.

Mark Yaconelli, an author, speaker and Co-Founder of Triptykos, a Public Action Program for the Center for Engaged Compassion at Claremont School of Theology.

Jason Pitzl-Waters, co-founder of the Pagan Newswire Collective who blogs at The Wild Hunt.

Mark D. Roberts, a Presbyterian pastor, author and speaker. He blogs at www.markdroberts.com

Svend White is an Information Technology consultant and blogger on Islam, Muslims and America at Akram's Razor.

Neylan McBaine, author, founder and editor-in-chief of The Mormon Women Project. She blogs at www.neylanmcbaine.com.

God is Light. Light upon Light (Quran 24:35). Immaterial, untouchable, unapproachable, intimately close, omnipresent. Light the maker of shadows. Nothing exists without God's presence. Nothing grows, thrives, blossoms, blooms without Light. Shadow, decay, are also from Light. There is no separate Good and Evil. God is beyond our understanding of the two. Light gives heat. We die when we are too far and when we are too close. Like clouds I want to dissolve in the Light. God's guides, the Prophets and Imams, bring us closer. The Light wants to be known. To see the Light!

Hussein Rashid is currently a professor at Hofstra University in Religion, and a visiting instructor at the Reconstructionist Rabbinical College. He is an Associate Editor at Religion Dispatches. He is online husseinrashid.com.

In 1845, Mormon poet Eliza R. Snow wrote, "In the heavens, are parents single? / No, the thought makes reason stare. / Truth is reason; truth eternal / tells me I've a mother there."

For Mormons, God is a Heavenly Mother and Father. God is a relationship of belonging that we can experience in connection with our families and ancestors.

I once dreamed of walking through orange groves towards a house. God the Father opened the door. He led me into a room-its walls hung with great handwoven afghans. There I saw God the Mother. I woke with wet eyes.

Joanna Brooks grew up in a conservative Mormon home among the last great orange groves of Orange County, California. Now she's an award-winning author and scholar of religion. She also writes the weekly column Ask Mormon Girl at askmormongirl.com and mormonmatters.org. Find her books and essays at joannabrooks.org.

There is a Jewish tradition to spell G-d with a space between the "G" and "D". This recognizes the holiness of G-d's name, but it also creates an empty place, where we as human beings have to "fill in" G-d's missing parts. G-d won't do everything for us. So instead, we are inspired by this "void" to create g-dliness on Earth. This desire to become better, both as individuals, a community, and a world, is what G-d is.

Patrick Aleph (also known as Patrick A) is the founder of PunkTorah.com, a site using technology and pop culture to bring Jewish spirituality to people who are disconnected from traditional Jewish life. He is also a writer for MyJewishLearning.com and Jewcy.com, and fronts the alternative rock/punk band Can!!Can (JDub Records).

God is not the God of Moses, and I the enslaved. God is not the wealthy party host, and I the poor and lame. God is not the rock and I am not the shipwrecked soul. As a citizen of the U.S., I struggle with cultural and self-medicating anesthesia. I live in Babylon, not Egypt, and for me God is heartbreaker. God is liberating grief. God is sobering loss. God is disturbing possibility-the Palestinian child who skips within my razored green zone singing, "Ally, Ally In Come Free!-The world is not as you have made it."

Mark Yaconelli is an author, speaker, and retreat leader. He is the Co-Founder and Co-Director of Triptykos, the Public Action Program for the Center for Engaged Compassion at Claremont School of Theology. His most recent book is titled Wonder, Fear, and Longing: A Book of Prayer.

Ekam Satya Vipraha Bahuda Vadanti (Rg Veda). The Truth is one, the wise call it by many names. This is both Nirguna Brahman, an impersonal, formless God, beyond conception, beyond reasoning, beyond thought; and Saguna Brahman, a personal God with good qualities and of many forms. God is finding the balance, to live within this contradiction, to follow one's Dharma, to open one's heart and love selflessly, while being open to the suffering that comes with it, constantly seeking the light of knowledge from the darkness of ignorance, knowing that I am both the same as everyone else and unique.

Padma Kuppa is a writer, IT professional, community activist,wife and mother working to build a more pluralistic society. Her interfaith involvement includes Troy Interfaith Group, an organization highlighted by Harvard's Pluralism Project, WISDOM, and the Interfaith Leadership Council of Michigan. She blogs at padmakuppa.blogspot.com.

Modern Paganisms are plural and within them the concept of "God" is also seen as plural, not singular. While many Pagan faiths acknowledge a source of some kind, they also believe that sacrifice, the act of making something sacred, or worship, the act of giving worth to something, are practices that evolve between the many deities and powers who have grown, struggled, and changed along with humanity. A second-century philosophical text has Epictetus saying the gods are "A constellation of eyes, the spirits of understanding; if you fear, it is fearful; if you are temperate, it is sanctified."

Jason Pitzl-Waters is author of The Wild Hunt and co-founder of the Pagan Newswire Collective. Erynn Rowan Laurie is an independent Pagan Scholar and one of the founders of the Celtic Reconstruction movement. She writes and teaches on many aspects of Celtic Paganism, Druidism and Filidecht.

P. Sufenas Virius Lupus is the Doctor, mystagogue, and functioning priest of the Ekklesía Antínoou - a queer, Graeco-Roman-Egyptian syncretist reconstructionist polytheist group dedicated to the god Antinous, the deified lover of the Roman Emperor Hadrian.

Mark D. Roberts is a pastor, author, retreat leader, speaker, and blogger. Since October 2007 he has been the Senior Director and Scholar-in-Residence for Laity Lodge, a multifacted ministry in the Hill Country of Texas. He blogs at http://www.markdroberts.com.

The concept of a singular God is not in found Buddhism. There is only practice as Buddha, which means "One who is Awakened." An adjective, Buddha describes our capacity to cultivate joy, love, compassion, and equanimity. Being Buddha means full engagement in life without preference for something different to be happening for or to us. It is practicing authenticity and the courage to live ethically. It cultivates living fiercely, fearless of the crucible which transforms our greed, rejection, and disconnect to generosity, open heartedness, and wisdom. Then, we see sacredness in the ordinary: a cup of tea, a falling leaf.

Lynette Genju Monteiro is a lay ordained member of Thich Nhat Hanh's Order of Interbeing, a student of Roshi Joan Halifax of Upaya Zen Center, and a psychologist. She is the co-founder of Sangha Arana, a mindfulness practice center, and the Ottawa Mindfulness Clinic in Ottawa Canada. She is often found polishing tiles and dusting mirrors, the traditional practices of Zen failures. She blogs at 108Zenbooks.

My God is closer than our jugular veins yet beyond human ken. He is quick to forgive and showers His mercy on those who seek Him, yet He will judge all. His Message and Law are sacred and binding, but are free of our drab 1's and 0's; their wisdom and beauty exhaust petty human categories, uniting the heart and mind. He sent Mankind thousands of guides over the ages and created us in tribes and nations so that we could know rather than fear one another. Thanks to His mercy, many roads lead to Him, even if some meander.

Svend White is an IT consultant. He is also a Muslim and an unapologetic liberal from Boston who somehow ended up in Oklahoma, where he lives with his wife and daughter. He blogs on Islam, Muslims, and America at Akram's Razor.

God is the father of my spirit, as my earthly father is the creator of my body. This Heavenly Father created me in His own image, meaning that He has a body that looks like mine, although His body is immortal. He knows me personally and loves me perfectly. To guide me through this earthly journey and help me return to Him, He provided a guide, His firstborn son Jesus Christ, whose life and teachings provide a template for what I too should do. When I return to Him, He will embrace me and welcome His child home.

Neylan McBaine has been published in Newsweek, Dialogue: A Journal of Mormon Thought, Segullah, Meridian Magazine and BustedHalo.com. She is the author of a collection of personal essays -- How to Be a Twenty-First Century Pioneer Woman (2008) -- and the founder and editor-in-chief of The Mormon Women Project. She blogs at neylanmcbaine.com.

One day we may discover that the universe
is shaped
like
one
infinite
questionmark-
a curving, twisting design
with no designer
or signer;
the ones who discover this cosmic art-puzzle
will then be filled with wonder
and wish to explore
to investigate further, farther, deeper, wider
until they are left withnothing but
the search
beyond faith
beyond god
beyond google
closer and closer to
simple
exquisite
naturally delightful
Beauty
and discover
it is
inseparably
enough. . .

Chris Highland is a writer, teacher, photographer and social worker. He was an interfaith chaplain with prisoners and streetpeople for over 20 years and left his Protestant ordination in 2001. His books include Meditations of John Muir; My Address is a River; and Life After Faith (to be published soon). He blogs at www.naturetemple.net.

Return to top of page What words and images about the Divine resonate with you? Post a comment ... or join the challenge and share your own "100 words on God" below.