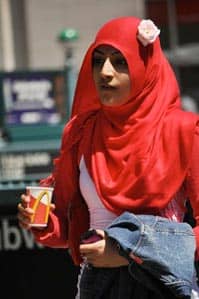 One of the more interesting aspects of the Islamic faith has been its continued ability to attract new adherents. Such a tradition is rooted in the history of the religion, and facilitated its rapid spread from Arabia to the far reaches of Africa, Asia, and Europe.

Here in the United States, converts to Islam represent a variety of ethnic and religious backgrounds, and account for close to one-third of this nation's 3 million Muslims. The vast majority, some 900,000 persons, are of African-American heritage, while the number of white and Hispanic converts is estimated at 75,000.

In terms of religion, converts to Islam come from many backgrounds, including Catholicism, Protestantism, and Judaism. By more closely examining the experience of Muslim converts, one can better understand the appeal and adaptability of the religion, as well as the future of the Muslim community in the United States.

For African Americans, the appeal of Islam has roots in their own cultural heritage. A number of Muslim slaves were brought to this country prior to the suspension of the foreign slave trade in 1807. Although most were unable to practice Islam, some left behind writings in Arabic that demonstrate that their faith was not forgotten. The Georgia State Library currently has an Arabic manuscript from the late 1850s, written by a Muslim slave from Guinea, Africa, which addresses topics of Islamic law as well as the indignities of slavery.

For most African Americans, however, contact with Islam did not come until the early decades of the 20th century. It was at this point that Islam was presented in a context that attempted to redress the long history of oppression suffered by black Americans. Nobel Drew Ali, an African American from North Carolina, was among the first to link Islam with the black consciousness. He theorized that blacks should consider themselves to be "Moors" or "Asiatics," which entailed embracing Islam. In his opinion, Christianity was the religion of whites; therefore converting to Islam would provide a source of pride and unity to the African-American community. While Ali's teachings did gain popularity, particularly in urban centers of the northeastern United States, today the movement is virtually nonexistent.

The group most influential in drawing African Americans to Islam was the Nation of Islam movement, founded by W. D. Fard in 1929. Fard further developed the theories proposed by Noble Drew Ali, asserting that Islam was the lost identity of America's black population. Subsequently, under the leadership of Elijah Muhammad, an African-American convert from Georgia, the Nation of Islam movement took on what was perceived as a racially separatist dogma, asserting that whites are inherently evil and that blacks must undertake to uplift themselves. According to Elijah Muhammad's teachings, converts to Islam were expected to embrace a standard of hard work, rigid ethical behavior, and observe conservative distinctions between men and women.

While the Nation of Islam gained a great number of converts, many Americans, including members of the established Muslim community, were hostile to the organization both for its extremist pronouncements and the absolute power maintained by Elijah Muhammad. Furthermore, the assassination of Malcolm X, a former follower of the movement who had questioned the legitimacy of Elijah Muhammad's teachings, by two alleged Nation of Islam members caused greater damage to its reputation.

True acceptance of followers of the Nation of Islam did not come until 1975, with the death of Elijah Muhammad and the ascension of his son, Warith Deen Muhammad, to leadership of the movement. Warith Deen Muhammad introduced a number of landmark changes that brought about widespread integration of the movement into the mainstream Islamic community.

He formally repudiated a number of his father's teachings, most prominently the tenets of racial separatism and militancy, welcoming other races into the movement. He then formally changed the name of the organization from the Nation of Islam to the World Community of Islam, and, finally, the American Muslim Mission, to facilitate greater acceptance of the movement.

In addition, in order to eliminate corruption, Warith Deen Muhammad liquidated a number of the movement's financial holdings, encouraging private investment as an alternative. As a final step, in 1985 he formally disbanded the American Muslim Mission, in the belief that integration of the Muslim community into a unified body must be fully supported.