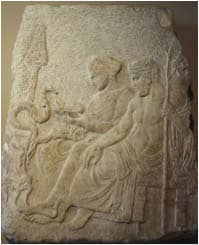 Whilst writing my MA thesis to give academically acceptable validation to the use of lithics within humanity's ancient concept of healing and self-help, thus proving them to be the foundations of all medicine, I came across areas of little known fact that served to illustrate just how much knowledge has been lost through the vast passage of time, due to modern scientific and religious indoctrination.

As an archaeologist, my desire to read between the lines of ancient myth and grasp the reality rather than the culturally manipulated story led me to be intrigued by the total inseparability of the concepts of amulets and matters medical, magical, and miracle. This ancient mindset totally eludes modern scientific logic and therefore has suffered devaluation, even ridicule; however it is the foundation stone of all medical practices.

Looking back into antiquity all surviving literature bears testimony to the academically accepted global exchange of early information, thus verifying the use of amulets as universal (Gager 1992, 220). Their origin can be traced to the busy cosmopolitan port of Alexandria founded by Alexander the Great, once a pupil of Aristotle, which arguably became the most important medical centre in the ancient world (King 2001, 26). It attracted all manner of peoples and cultures, precipitating multilateral exchange, equating in a mixed citizenry with indefinable cultural identity (Rauh 2003, 85). Within this buoyant multiracial environment it is easy to see how the many concepts of healing were adopted, becoming a derivative of amalgamated magical, medical, and religious beliefs (Kent 2004), which was later reflected within written literature (Betz 1992, xlviii).

Etymology of the word ‘amulet' suggested by Varro (118-29 B.C.) comes from the Latin verb amoliri meaning ‘to drive away' or ‘to remove,' which is indeed a true reflection of our understanding of amulets, for regardless of type, they are worn to ‘drive away' or to achieve the ‘removal' of peril from an ascribed source.

Surviving literary evidence shows they were used in a multitude of circumstances, from issues of health through to a response to curses and fate (Flint 1999, 51). Though they visually evolved, eagerly fulfilling the cultural demands, their ethos remained constant, perceived as a positive contribution to combat life's negativities through the holistic aspect of ancient Greek medicine, which was certainly not overburdened by scientific logic (Dickie 2001, 25).

Looking into these aspects of ancient healing within myths and antiquity lead me to the aspect of miracle, for they abound therein. However the truth so deeply encoded within the evolution of ancient cultural indoctrination is mostly unrecognizable. But it is not of these transient truths that I speak. I accept that the darkest recesses of antiquity can only be punctuated with plausibility, however the Asclepios Miracles of Epidaurus provide indisputable proof of such occurrences.

These are the surviving living testimonies of grateful recipients who were cured after being treated at the Temple; their words are etched upon great tablets of stone that survive to this day. Not all are completely legible but seventy are clearly decipherable, and the truth therein has been translated by archaeologists, not theologians, making the translation less likely of being subjected to selective interpretation.

For those who were until now ignorant of this wonderful testament of pre-Christian Divine benevolence I will further enlighten, not only to enhance your history, but also to restore balance and bring truth.

Asclepios according to Greek myth was once a great king, who during his life worked wondrous healings, hence typical to many stories within mythology, and like many heroes, in death he gained deification. By the 6th century B.C. he was well known and worshipped as the healer son of the god Apollo; this probably arose due to locational association. Later he was also accredited as the father of the goddess Hygea, whose mystical double-snaked staff often features in modern medical logos.

Myth has it that the town of Epidaurus, situated on the Saronic Gulf, close to Athens, was his birthplace; by this time it was already the well-known location of the ancient sanctuary to Apollo Maleatas where many pilgrims came seeking to be healed. By the 6th century B.C. the Apollo shrine, nestling in the hillside, was no longer sufficient to serve the number of visiting pilgrims, and so it was expanded into a much larger temple complex with baths, dormitory, and gymnasium. This healing temple was the workplace of holy men, the Asclepiadea, who were the physicians of the time; it was believed, through ancestral lineage, they were the direct descendants of Asclepios.