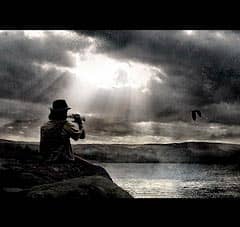 I don't think I've ever written an account of my conversion except in a devotional address that I did at BYU several years ago. Even then, I didn't give a full account. Part of my reason is that the story is extremely personal. I don't mind telling others about it if the occasion is right, but the public character of writing and the super-public character of the internet has made me worry about what would happen were this story written down.

Of course, I've told any number of versions of the story because the occasions for telling it have demanded different emphases and because, over time, some things stand out as more important than they once did. That is another reason for worrying about putting my account in writing: I'm not sure that I want any one of its versions to become the "official" one. Nevertheless, I've decided to put mine in writing.

During the summer of 1961, I was a couple of months short of fourteen years old. With other junior grade U.S. Army officers, my father was enrolled in a hospital administration program run by Baylor University at Brooke Army Medical Center in San Antonio, Texas. During breaks between classes, the participants talked and relaxed in the coffee room, but one of the other participants who sat next to my father in many classes didn't drink coffee. Instead, Bob Clark drank Postum. One day my father asked if he could try some. Of course he could, but after one sip he didn't want any more. "It tasted like boiled floor sweepings," Dad said. The question of why anyone would drink that stuff led, of course, to a discussion of the Word of Wisdom and, you will be surprised to learn, to two questions: "What do you know about the Mormons?" and "Would you like to know more?"

The answer to the first question was, "No more than what we picked up when we stopped at Temple Square on a trip through the West a year or so ago." That wasn't much. I'm not sure what my parents' reaction was, but I remember sitting in the back seat of our car reading the Articles of Faith on a missionary card. Little of it seemed very different to me than my own beliefs. I was a member of the Disciples of Christ Church, one of the ecclesial descendants of the Campbellites, and I was beginning to think about perhaps being a Disciples minister. The stuff about the Book of Mormon was curious, and the idea that the new Jerusalem would be built in the Americas was outright strange. Otherwise, it looked like standard doctrine; it certainly didn't make us want to know more. But the Postum and the fact that my father liked Bob raised Dad's curiosity, so the answer to the second question was "Yes." He and my mother were invited for supper with "two friends" the coming Saturday.

Mom and Dad came back from supper having enjoyed the discussion with the missionaries and interested in hearing more about the Mormons. They continued to go to the Clark home once a week for several weeks. Then they invited the missionaries to come to our house. I wasn't interested, so I skipped the first meeting or two. Nevertheless, by stratagem (a combination of trickery and a pretty girl my age) my mother got me to come out of my bedroom to join in one of the meetings.

In spite of my reluctant entry, I was hooked almost immediately. The first discussion I took part in was on the Plan of Salvation, and I found what the missionaries taught interesting. In addition, they could answer all of my questions, which impressed me very much. It took me more than one session to figure out that they had memorized their presentations as well as the answers to my questions, but it didn't matter. They could answer them. That was what was important to me. Everything they said made sense. Like many looking into the Church's teachings, it seemed as if they were teaching me things I had always believed, even though I knew I hadn't. I felt at home as we talked, comfortable with what I heard.

The missionaries continued to teach us for months. I continued to find what they had to say thought provoking, and I learned to admire them in spite of the fact that I thought them strange: they were serious, studious, religious young men who couldn't take off their black suit jackets when they visited us, even though almost no one in those days had air conditioning and it was 95 degrees outside with 95% humidity; they lived together, drove a Rambler, and couldn't date; they couldn't listen to the radio and consequently knew nothing about the Shirelles or Chubby Checker. But despite the fact that we continued to study with the missionaries, we weren't getting any closer to baptism.