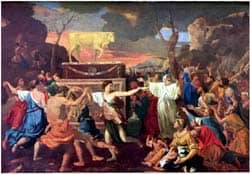 This portion deals with the golden calf "incident."  What leads up to the golden calf is a series of instructions to Moshe (Moses) while he is up on Mount Sinai, having a chat with Hashem (G-d). The first section of the portion deals with G-d instructing Moshe to have all Israelites 20 years old or older give a half-shekel as an offering, and those gifts were to go to maintain the Tent of Meeting. This had no connection to financial standing. Everyone, poor or not, had to give this offering. After that, the portion deals with directions for the priests entering the Tent of Meeting to burn sacrifices and how to make anointing oil and incense. Once again, G-d mentions that all the people must keep Shabbat (the Sabbath).

While all this is going on, the people are getting restless. Remember when your mom left you home alone for the first time? And she told you to do your homework and not watch TV... but it feels like she will never come home so why not just turn on the tube for a bit? Well, that is like what happened here... only it was a bigger deal than watching TV. The Israelites fear that Moshe is really never coming back down. Their faith is weakened. They turn to Aaron, Moshe's brother, and beg him to make a god for them that they can truly see and know. Aaron thinks he could talk them out of it by requiring a high price. He tells the men, "Give me all your gold jewelry and that of your families." The men run home excited! Here's a chance to touch and see a god. At this point, the drash (interpretations) differ. I am partial to this one: The wives and children look at their fathers as if they are crazy! Of course they don't want to participate in this process. A gold statue isn't their G-d! So, the men gather their own gold and go back to Aaron. He thought they would turn it down but he was wrong. He builds the calf and the men danced and made sacrifices and ate.

G-d is angry. G-d sees this behavior and wants to destroy the people. Moshe begs G-d to spare them. He can't see what they are doing, really, but he knows his people. So G-d relents and let's Moshe go down and see it for himself, taking with him what have been called the Ten Commandments of the Tablets of Testimony. Well, mom came home and saw you goofing around. Moshe was mad! He tossed the laws onto the ground in his anger at seeing the people dancing around their new idol. He destroys the idol and the people who were responsible. And yet, he still asked G-d to forgive all of them. G-d does forgive them, but G-d warns that the effect of their behavior will be felt for generation after generation.

Moshe goes back to G-d with fresh tablets and they try this process again. Second chances are always important.

A special thanks to g-dcast for the weekly parasha cartoon.

Again, this Shabbis is a special one. In preparation for Pesach (Passover), we read a section of parashat Parah (Numbers 19) were we talk about the laws of the Red Heifer and the rites of purification. The Red Heifer was a sacrificial cow. Its ashes were used when a person came in contact with a dead body. This parasha helps us prepare for Pesach, which requires each Jew to be ritually pure.