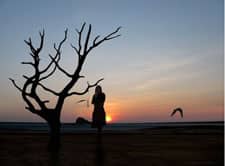 I brought a quiche today to a friend who is suffering.

A few years ago, I would have balked at the value of such an obvious display of charity. An act like that smells so much more of the pity sort of charity than the love sort, and who wants to be pitied? Plus, I would have been disenchanted by the thought of looking like one of those posed church pictures where one white suburban woman stands smiling on the doorstep of another white suburban woman's home holding out something delicious in a casserole dish.

I have been taught my whole life to serve. I believe Christ when He said, "If ye have done it unto one of the least of these my brethren, ye have done it unto me" (Matthew 25:40). Every morning before school, my mother sent me out the door with the same words: "Do something nice for somebody else today." And I did. Systematically, in fact. Growing up, I challenged myself to do something deliberate daily, like opening a door for someone or helping a friend with a difficult homework assignment.

Maybe because I got good at it, that kind of service didn't seem like real service anymore by the time I got to college. So okay, I thought, I'm a nice person. Great. But isn't Christ challenging us to do more than just open doors for people? Aren't we supposed to be doing the big stuff, like serving in homeless shelters or holding sick babies at inner-city hospitals? I didn't do much of this myself and what I did do was mostly out of guilt that I wasn't doing more, but it seemed to me that soup kitchens and hospitals were where the rubber really hit the road.

There was a time, newly married and living a grown up life, when I was disappointed in our efforts as members of the Church to serve in our local communities. As Compassionate Service leader in my Relief Society in San Francisco, for instance, I tried to organize an "external service" arm of my committee. But that ward consisted in large part of young families, and on average we had sixteen pregnant women at any one time. The Compassionate Service committee spent all of its efforts tending to the food and babysitting needs of these new mothers. Lists were sent around each week for Relief Society sisters to sign up to bring meals, sometimes for up to two weeks even if a mother or mother-in-law was swooping in to care for the new mom.

As a community, we Mormons take care of our people. It is an awesome and admirable accomplishment. But my efforts to organize an external service arm of my committee were a complete bust. Tending to the needs of sixteen new mothers at any given time completely sapped the resources of my Relief Society sisters. The activity I scheduled at a local abused women's shelter attracted only three volunteers.

I was bitter: Living in San Francisco, shouldn't we seize any opportunity to get out in our community and represent the Church as the service organization Christ commanded it be? Shouldn't we sacrifice and put ourselves in uncomfortable positions -- like going to a secret location to visit with women who have run away from abusive men -- in order to do the work of Christ? I didn't feel it required much sacrifice to cook more dinner and then take it over to a woman who was likely a friend anyway and who would likely hand over a cuddly, adorable newborn to hold.

So how did bitter little me end up with a quiche at a friend's doorstep this morning? For starters, I became one of those new mothers in my San Francisco ward, and those first terrifying weeks of motherhood were punctuated by the smiling faces of friends who showed up to bring me back, even for just a few minutes, to a pre-mommy identity. My husband and I still quote from the Bill Cosby DVD my friend Jenny brought for us to watch during those interminable hours of breast-feeding. We had never laughed so hard. We laughed too when Elliot touched one of the chili peppers another friend included with her fresh Mexican food and he spent the meal in the bathroom flushing out his stinging eyes.

Through new motherhood and the years since, my understanding of human pain and how it is alleviated has matured. Specifically, I have become much more familiar with and sympathetic to emotional pain. While physical deprivations and abuses remain low-hanging fruit on the spectrum of service goals, emotional pain is far more harshly judged because it is assumed to have a direct relationship to material comforts: We believe that if people have their physical needs met, their emotional suffering cannot be of the same magnitude as that of a needy person.

As I tended my dying father, whose life had been replete with emotional pain despite having his physical needs cared for, I recognized that pain could not be scored with any objective measure, since each person's pain is relative to the expectations and context of their experience. A teenager ostracized at school, for example, still suffers even if he takes the opportunity to go to school for granted. We cannot ignore his pain because some youth don't get to go to school at all. We cannot discredit the confusion of new motherhood even though the woman has a bed to sleep in at night and clean bottles for her baby, which are luxuries some new mothers don't enjoy. Is a new widow's gaping loneliness of less intensity or greater indifference if she has a financially-secure retirement?