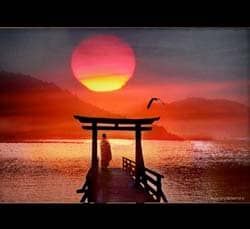 Accepting Buddhism, however, differs significantly from conversion to a biblical faith. It does not entail complete renunciation of one's previous faith, but leaves room for many of its assertions to remain as valid stepping-stones along the spiritual path.

His Holiness the Fourteenth Dalai Lama, however, discourages conversion to Buddhism. Although followers of other religions, as well as nonreligious persons, may learn helpful methods from Buddhism, discarding one's native system of belief may bring unforeseen problems. Except for a small minority, most people benefit more from deepening their understanding of their traditions of birth.

In Islam, Christianity, and Judaism, conversion means to give up one's former religion and to adopt a new faith. The incentive is the conviction that the new religion is truer than the former. Although converts are often allowed to blend in nondoctrinal elements from their native cultures, they need, in fact, to recognize the new religion as the only true one. This follows from conviction in the "One Truth, One God" ethos of these biblical religions.  Optimally, one gains this conviction by studying its doctrines or by an epiphany. Some people, however, change religions for less profound reasons, such as economic or social gain, or for marrying someone of another faith.

Sometimes, zealots have converted others by force to their religions -- an extreme action officially allowed only in certain cases. Forcefully converting enemies, for example, is a means for neutralizing and ending their destruction. It is also purportedly a method for saving "sinners" from falling to hell and for leading them to heaven. Rehabilitation programs for prisoners, whether to become productive members of Western societies or cadres in communist states, have the same objective. One could also describe the actions of some governments for spreading communism, capitalism, or even democracy, as examples of forced conversion to stop exploitation.

Many people, especially idealistic newcomers to Buddhism, would like to believe that Buddhism has been immune to the phenomenon of conversion, especially forced conversion. Dividing the world into good versus evil, and with images of inquisitions, malevolent missionaries, and conversion by the sword, they see forced conversion as something that only the bad side has done. Before self-righteously condemning other religions or governments for this phenomenon during the dark chapters of their histories, however, one needs to examine objectively whether Buddhism too has fallen prey to the practice of forced conversion. Otherwise, desperate yearning for a flawless religion and romantic projection of a Shangri-La paradise onto Tibet, for instance, may turn to disillusioned despair and dismay, like that when learning of the misdeeds of a teacher one had thought was a Buddha.

It is true that, in principle, Buddhism is not a proselytizing religion. It is also true that neither Tibetan nor Mongolian history has seen forced mass conversions of conquered populations to Buddhism or to one of its sects. Even when rulers of these lands have declared Buddhism as the state religion, they may have levied taxes on their people to support the monasteries, as in the case of the Tibetan King Relpachen (Ral-pa-can) in the early 9th century C.E. Yet, neither the rulers nor their religious councils forced the population to accept and practice the Buddhist beliefs. Buddhism spread among common people slowly and organically.

Nevertheless, numerous examples exist of the forced conversion of Tibetan monasteries from one Buddhist sect to another or the recognition of a tulku (reincarnate spiritual master) as being of a different school than was his predecessor. The unstated motive has usually been to neutralize political or military opposition, as was undoubtedly the case in the 17th century C.E. with the recognition of a Mongol prince as the Gelugpa reincarnation of the Jonangpa master Taranatha. Taranatha was the royal advisor for the opposing side during a civil war.