Before we step further into the new decade and new year, let's take a moment, along with every other pop culture critic and fan, to share our reflections on the "best of" the decade. Unlike those others, however, this isn't necessarily a "best of" list, but rather a highlight reel, so to speak, of ten films that we found spiritually or theologically significant. This is, of course, perhaps more nebulous than any other "best of" list because spiritualities and theologies are so deeply personal and individual. Most importantly, like all good spiritualities and theologies, we hope this list inspires conversation and reflection.

What would make your top 10 list of the most spiritually/theologically significant films of the last decade? Join the discussion...

We've tried to include a range of favorites, from religious blockbusters to indie films, Academy Award winners to films that were largely ignored. Some of these films deserve a second look. Two films are documentaries and one is animated, which may reflect the greater significance of these forms of storytelling over the last decade. There is one French film (or, in the argot of the decade, "Freedom Film"). Notably absent are the massive blockbuster franchises that so many of us spent our movie money on during the last ten years. This is not so much because these films were lacking in spiritual significance. Far from it: many of them were quite spiritual. But perhaps we wish to call attention to quality rather than quantity (of budget, box office, or audience). And maybe in our studies of pop culture, we've seen enough books with titles like, "The Gospel According to HarryPotterStarWarsTolkeinTheMatrixTwilightSpider-ManX-MenStarTrek." Regardless of our choices to sum up this difficult and difficult-to-summarize decade, the title of a pioneering work in our field by John Wiley Nelson (Westminster Press, 1976) continues to resonate: "Your God Is Alive and Well and Appearing in Popular Culture." 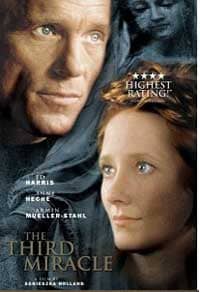 This might considered "The Best Spiritual Film You Didn't See." What The Third Miracle does, in addition to providing an unvarnished character study of a fallen but still fighting servant of God (played by Ed Harris), is question the morality of the miraculous. Is it right for God to grant miracles to some and not others in a universally suffering world? Part gumshoe movie, part mafia movie, and part courtroom drama, this film is spiritual noir. Ultimately, God is at the center of this mystery, and God is on trial. It's the kind of film we could stand to see more of in an era where made-for-TV "miracles" are doled out on Oprah and Extreme Makeover Home Edition as Prozac pablum to a frenzied and neurotic nation.

Hayao Miyazaki seems to fear that something has been lost in the material success of modern-day secular Japan. The Shinto spiritual ethos that animates this film, exhibited in such whimsical creatures as radish spirits, river spirits, soot sprites, and dragons, reminds as much as it entertains: "Look, the spirits are still alive if we just take the time to notice them." Christianity has taught many of us Westerners to mistrust animistic religions as superstitious, idolatrous, or at the very least, theologically flimsy. Here we see an animated feature that has much to teach Westerners about the value of seeing the divine in the diverse "spirits" of everyday life. The loving and detailed craftsmanship of the film, and its meditative pace, serves as part of its spiritual message, making it one of the greatest animated films of this decade to boot.

Jean-Pierre and Luc Dardenne's style of filmmaking is the least technologically complex of the lot, yet they accomplish more thank filmmakers who invest millions in special effects. Stripping their films of any extraneous effects or music, we are more intensely focused on, and thereby invested in, the lead characters, in this case, a carpenter, Olivier, and a would-be student, Francis. After initially refusing to take on Francis as a student, Olivier suddenly agrees. To say more would be to spoil the experience of watching the film and the effectiveness with which the filmmakers reveal the nature of their relationship. Suffice it to say, Le Fils embodies some of the same theological themes of another film on this list, The Three Burials of Melquiades Estrada, but perhaps in more intimate ways given both the characters' relationships and the filmmakers' style. Like many of the Dardennes' films, Le Fils is not only narratively inspiring, but artistically as well...that is to say, they are examples of what aspiring filmmakers can do with minimum resources.