Thinking Myself into Mormonism 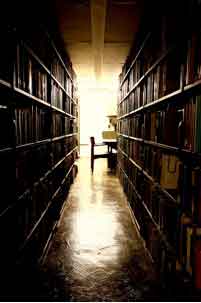 The Green Library stacks are a study in contradictions. Outside lies Stanford grandeur -- three-story stucco architecture spread across multiple thousands of acres, perfectly manicured lawns and plant arrangements, arches, gates, fountains. The rest of Green Library shares that aura: airy rotundas with marble floors and booming ceilings, elegantly decorated study lounges with comfortable, oversized couches, crisp clean top-of-the-line Apple G5 computers, luxurious carpeting, and well-lit lines of bookshelves holding knowledge in tens of different languages. In contrast, the stacks are cramped and stark. At six foot two, I'm constantly afraid I'll hit my head on the overhanging pipes and the sprinklers. Glaring fluorescent lights shine on the hard floors, and the occasional dusty computer looks to have been plucked from the turn of the millennium.

That's where I went wandering on a warm October day in my junior year of college, searching for some book on Mormonism. I had been baptized LDS a couple of months earlier, after a journey that started when a girl I was dating sent me a Book of Mormon and walked me through 1 and 2 Nephi.

We broke up, but by happenstance I ended up with a Mormon roommate the next year. And in a time when a cloud of darkness surrounded me, I ran across Joseph on his way to church. "For the good that I would I do not: but the evil which I would not, that I do" (Rom. 7:19) would have been a pretty good description, if I had known the words then. He was late; and I made him later. I kept coming back because of the fruits I saw: the tangible goodness of the people, the less tangible meatiness of the Book of Mormon, like the beauty of Lehi's vision.

It was the empiricism of Alma 32 and that "the glory of God is intelligence" (D&C 93:36) -- aspects emphasized by the man who would eventually baptize me -- that helped me see how such teachings could be true, even grand and wonderful. My occasional prayers to know whether this stuff was true grew in urgency. During one fast and testimony meeting, I received an answer: Feelings of peace and love for the congregation bubbled out of me, and for thirty minutes I could not stop shaking.

Back at Stanford, I was curious about something or another and resolved I'd go to the library. Ascending some solid, utilitarian metal staircases, I found the book I was looking for, but then my eyes were drawn to a wall of red covers of bound periodicals dating back forty years, dominating the Mormon section. On each red cover white letters spelled Dialogue: A Journal of Mormon Thought.

The journal, I soon read, had been co-founded forty years earlier by Eugene England and Wesley Johnson, then both Stanford professors. And, interestingly, Brother England had been in the bishopric of my ward.

My journal of the time has been lost, but I vividly remember a maelstrom of emotions within a short time span. The first and hardest hitting was disappointment. I felt sad. Let down. Shocked. Wanting to close the book, to end the emotional barrage, at the same time being sucked in, trying to learn more and realizing that closing the book was not the answer. In a corner on the third floor, I turned the pages of Lester Bush's articles about the priesthood ban and its racist origins and justifications. Others about baseball baptisms and inflated growth statistics in Latin America. Women, or the lack thereof, in the Book of Mormon. Mormon intellectual life and the September Six.

Emotions: estrangement, after an afternoon spent in the library reading Dialogue. I remember getting caught up in it and missing a Church activity, wondering, perhaps as a justification for not going, what the point was anyway.

I asked a few questions. On the one hand, I saw the point when the institute director explained why he didn't focus on historical "bales of straw." On the other, that attitude assumed that Church teachings were correct in the first place. It might sound silly, but I remember in particular an institute class on eternal progression. The director taught the opposite position, but to me, Eugene England's position (God is still progressing in knowledge) made sense and Bruce R. McConkie's official reprimand seemed overbearing, at the least.

The end result was a question that sometimes popped into my head around then, prompted by these turbulent emotions: "How can I still call myself a member of this church?" Especially embarrassment: The Litany of Embarrassing Stuff is probably longer for Mormons than members of other religions -- certainly more immediate. Controversies over Muhammad's wives? That happened over a millennium ago, in a different culture. Joseph Smith's multiple wives? That was yesterday -- in the 1840s, in Illinois. Perhaps at this point, the conservative reader is getting the impression that interaction with less-faithful scholarship loosened my grip on the iron rod.