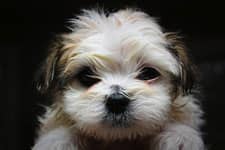 My dog, Ramses the Great, Lord of the Nile, was a beautiful dog.  At least, I thought he was beautiful.  He was a brindle boxer (meaning that he was not the light golden color, but the mottled dark brown with black and white in all the appropriate areas).  He had dark brown eyes that were the most expression-filled eyes you'd ever seen in a dog.  I thought he was spectacular.  But others said, "What an ugly dog!" or "He looks so mean" or "He's scary looking!"  Baloney, I thought.  Sure, he had an underbite from Seattle to Sacramento, and he had typical boxer teeth on his lower jaw, and of course, from time to time, he had doggy breath.  But I couldn't help but wonder if his feelings got hurt when people made insulting comments around him.  I even worried about it.  If it happened, I made sure to put in my two cents really quickly, and proceeded to pat him on the head and give him a hug so he knew how I felt about it.

I need to learn more from my dogs.  You see, I doubt that Ramses really cared what he looked like to me.  I'm pretty sure he never sat around worrying about his appearance.  He knew that I loved him as he was, that I thought he was absolutely fantastic.  There's a lesson we'd all do well to learn: rather than worrying about how "ugly" I might appear (physically or spiritually), I need to remember that the Master thinks I'm beautiful.  He went to great lengths (all the way to the cross) to make sure I knew that He is crazy about me.

Another lesson: my dog didn't fret about whom he was supposed to please.  He knew that I was his dad, and he was so absolutely, totally devoted to me that he couldn't wait to be in my presence again when we were apart.  I would be sitting on the couch, typing on my notebook (writing these meditations, often times!), and he would set his paws and chin on the keyboard to help me type.  Or I would be watching a Laker game on television (the World Champion Lakers, that is!) and he would pull himself into my lap, rest his head on me, and be totally at peace.  I need to crave the same kind of togetherness with my Master, to find the same kind of peace in his presence.

Further installments in the "Lessons My Dog Taught Me" series appear each Monday at the Evangelical Portal.