Musings of a Meandering Pilgrim: The Annunciation 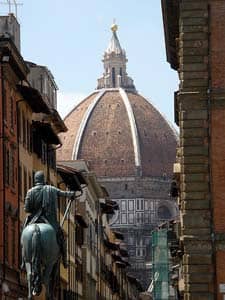 This is the third in our "Musings of a Meandering Pilgrim" series, in which spiritual director and poet Rebecca Cole-Turner shares reflections from her pilgrimage abroad.

I made a point of going back to the Basilica of Santissima Annunziata recently for the Feast of the Annunciation. The sun was still drying the cobblestone streets as I entered the great square, Piazza della Santissima Annunziata, so named because Mary said "yes." The Piazza was noisy, crowded, a joyous medieval fair near the center of Florence.

I exchanged a few buon giornos with the merchants, tried on a few hats and admired the lacework, smiled at the two elderly men selling Italian opera CDs, and then ducked into the church itself. The dark interior was lit by hundreds of candles. Instead of everyone looking at the altar straight ahead, most of the pews and kneelers were reversed and people were looking at a back corner of the church. As I observed more closely, I saw the object of their veneration: a painting of the Annunciation, the angel Gabriel telling Mary she would bear the Son of God. The monk who began the painting over 500 years ago stopped his work because he thought it wasn't good enough. The next morning he returned, and to his great surprise, it was finished. The monk and his companions believed that an angel had come during the night to do what he could not do.

When you see the painting today, it is encased in layer after layer of Baroque adornment, starting with an encasement of sterling silver. As I walked up to light my candle so I could get a better look at it, a group of small children began to pray in unison in Italian:

Hail, Mary, full of grace,
The Lord is with thee,
blessed art thou among women,
and blessed is the fruit of thy womb, Jesus.

Holy Mary, Mother of God,
pray for us sinners
now and in the hour of our death.

At that moment, quiet came over the scene. Everyone stopped and listened and . . . smiled. The only sound was of the soft voices of children in unison.

Were they really asking Mary to pray for them as sinners? Were they actually contemplating the hour of their death?

Or were they voicing their own annunciation of the coming of Mary's Holy Baby? Or of the Holy Spirit's miracle in their own young lives?

Those of us who watched sensed we were witnessing a sacred moment, when "a little child shall lead them," perhaps with a little help from an angel, who finished the job without being seen.

When I returned to my apartment a few blocks away, I wrote a short poem about Mary's moment and my own.

Feast of the Annunciation

The square outside Santissima Annunziata is filled
to overflowing with purveyors of candy and flowers
and tablecloths and gadgets. An aproned butcher stands
ready to shave off some pork from the fattened pig that's
been roasting all night on a spit. A vendor of cheap
jewelry calls to me and says he's got just the necklaceI need.
A Gypsy woman in a long velvet skirt holds out her
hand, points to the baby at her breast, and says per favore.

What all these things have got to do with Gabriel's
big announcement to a startled young girl that she would
bear the Word-Made-Flesh escapes me. Walking past
these hawkers of goods, I step inside the dark ancient
church, buy a slim white taper from the smiling priest
for one Euro. I walk to the railing to light it and pray,
see the painting that a monk abandoned 500 years
ago and then said it was finished by an angel: it's not
often that you can start a fire and feel holy at the same
time but in this place I do and receive a blessing as well.

I wonder if Mary knew on that day 2010 years ago
what all she would start by simply saying "yes"?

After a 35-year career as a therapist and counselor educator, Rebecca now serves as a spiritual director, retreat leader, supervisor/teacher in spiritual direction training. Her practice is called HeartSpace Ministries. She is also a writer of prose and poetry.