Avoid Being the Wicked Stepmother 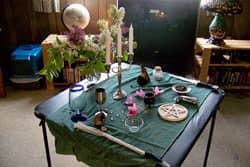 The Elements have been evoked. Candles flicker peacefully and comfortably in the otherwise darkened room. Gentle wisps of incense smoke float effortlessly through the air. Soft rhythmic music plays in the background. All of the participants in this Sabbat ritual are beginning to naturally slip into a lucid other-consciousness, that curious merging of states where excited expectations for the miraculous are high cradled within a deep sense of calm and safety.

The Coven's High Priestess closes her eyes and opens herself up to allowing the Goddess to enter and inspire her. She lifts her arms up and takes a deep breath. Yes, she feels it now. It's happening, and it's beautiful. A smile crosses her lips, and she finally finds her voice. "Listen to the words of the Great Mother, who..."

"I gotta get through, " a brash female voice disruptively shatters the moment.

The High Priestess's teenaged stepdaughter stands defiantly on the perimeter of the Circle with her hands on her ample hips. "You guys are blocking the way to the front door, and Becky just called me on my cell saying she wants to meet me at the mall. And it's not like I can stay in my room all night or anything. Um . . . yeah. So I'm gonna go now."

The teenager then pushes through the participants of the ritual, her suitcase-sized purse knocking a couple of ritual candles off the altar in the process. Hot melted wax spills all over the carpet. She trips over the ceremonial robe of an important guest that was invited from a neighboring Coven.

"Sorry!" the teenager sarcastically hollers over the sound of the front door slamming shut. The over-flowery notes of her designer perfume are left hanging in the air. The moment is shattered almost beyond repair. All eyes shift to the High Priestess who stands utterly embarrassed, and utterly unsure of how just to proceed without making things worse.

This scene, unfortunately, accurately depicts events that all too often have occurred in my home in the past. I married a man who was raised Catholic and has three teenagers. Although he considers himself now to be mostly agnostic, he is curious about some of the aspects of my Neo-Paganism, and sometimes participates in a Coven ritual, class, or meditation session.

We often have deep meaningful discussions about my philosophies of the Divine. He can even rattle off Neo-Pagan terminology like an old pro, often peppering a conversation with words like "Sabbat," "handfasting," "Athame," and "mystery tradition." More than once he has come behind me while I'm making coffee or preparing a snack in the kitchen, has nuzzled my neck, and whispered, "My Goddess, let's go perform the Great Rite." We've read erotic mythology together. We've celebrated the Full Moon by the shores of the Delaware River, just the two of us making a bonfire and experiencing the tantric energies that this time of month can offer.

I have to admit it. Without my husband, I could not do the things that I do. I could not successfully commit to my role as High Priestess. He has graciously cooperated in facilitating the Coven I founded to come into our home once a week for our classes, and for Esbat and Sabbat celebrations. I'm far luckier than some of my peers. Some women I know have only recently even admitted their Paganism to their spouses, and this has been a source of varying friction within their relationships. They're thankful to just be able to admit to what they believe in. I doubt their husbands would ever allow a vibrant and joyful Coven into their homes to celebrate a ritual that's all too often misunderstood or even ridiculed.

Further complicating my own home is the fact that I have become the Wicked Stepmother to my husband‘s unruly teens. Living in a blended family has enough hurdles to overcome. There are issues to deal with like disrespect, jealousy, house rule enforcement, manipulation, privacy and personal space, shared chores, schedules, and a myriad of other struggles for adapting and learning to live with the strangers who are suddenly in our midst. Add in one very guilty and overly accommodating biological father who caves in to every whim and want that these werewolves constantly confuse him with, and you're left in a state of confusion and disarray.

I'm certain that any interfaith family, whether in a purely biological or a blended family, has its own challenges and confrontations. I'm sure that our situation would be strained if I was Jewish, Buddhist, or Hindu. There are bound to be grey areas of confusion concerning the beliefs, holidays, and practices of someone who is not of your faith. However, I can't help but think that the open hostilities toward my faith from my stepchildren stem from the fact that Neo-Paganism is often openly chastised and attacked within our society. They're simply giving in to the hype.