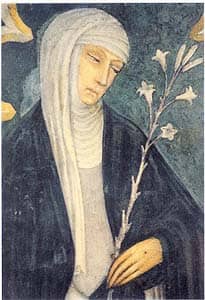 This is the fourth in our "Musings of a Meandering Pilgrim" series, in which spiritual director and poet Rebecca Cole-Turner shares reflections from pilgrimage to Italy.

When I was a little girl, the most exotic name for a crayon in my big 64-Crayola box was "Burnt Sienna." For many years, I would pick up that color and wonder, Where in the world did this name come from and what does it mean? As anyone who's ever colored knows, Burnt Sienna is quite a lovely color. It works well to make bricks, patios, and houses. It's also a nice color for sunsets. In the past twenty years, this color has been very popular in home decoration: we once had our master bedroom painted Burnt Sienna.

In fifth-grade geography, I remember finding Siena on the map of Italy. So there really was a "Sienna," or at least a Siena. I wondered if all of the buildings in Siena were painted Burnt Sienna and if that is where Crayola got the name.

According to the Crayola.com website, the "personality traits" of Burnt Sienna are "earthy, dependable, comfortable, nature, simplicity, comfort, quality, harmony, hearth, home, security, sense of belonging, family life, down to earth." Under music associated with the color, the website lists "Brown-Eyed Girl" by Van Morrison, one of my all-time favorite songs. But nowhere does it say that "Burnt Sienna" and Siena, Italy, are connected.

So it was Wikipediato the rescue. "The name (‘Sienna') derives from the most notable Renaissance location for the earth, Siena, Italy, and is short for terra di Siena, ‘earth of Siena.'"

I decided I needed to check all this out for myself, so we took the bus from Florence through the hills to Siena, literally in search of the local color and of the local saint, Catherine. As we got off the bus, I looked out over the city and saw many shades of sienna. In fact, as the late afternoon sun reflected off its medieval walls, the city was awash in "Burnt Sienna"!

Saint Catherine's home is on a cobblestoned side street, halfway down a steep incline. Walking out onto a cool balcony, I saw the city below. A more-than-life-size statue of the saint stands quietly in the loggia, arms outstretched as if she is blessing the city. There is the requisite gift shop and a large room filled with paintings about Catherine's eventful life. Actually, her "home" is now a series of small chapels.

But it is the church at Casa di Santa Caterina that called to me. As we entered its peaceful coolness, I thought we were the only two people there. Then I heard two soft, muffled feminine voices coming from a door that was lightly ajar. I turned around and from where I sat, I could see that two women, one of them a nun, were engaged in spiritual direction. I thought, How appropriate in the "home" of a woman who counseled a pope, nobility, and everyday people almost 700 years ago.

Turning back to the altar, I spent some time studying the triptych there: Christ is on the cross in the center, with Catherine on the left. Then I looked up above it and saw a painting of the Holy Spirit as a dove. For a long time, I kept looking at the rendering of the Spirit, pondering its meaning in Catherine's life.

Catherine was one of 25 children. Her twin sister died and then her mother, Lapa, gave birth to one final daughter. Catherine was a severe ascetic who was accepted into the Dominicans as a Tertiary and continued living in her parents' home. Canonized by Pope Pius II in 1461, St. Catherine's feast day is celebrated April 29. She was named, along with St. Francis, as a Patron Saint of Italy by the pope in 1940. Then in 1970, she and St. Theresa of Avila became the first women to be named Doctors of the Church. Finally, in 1999, John Paul II named her as one of the Patron Saints of Europe.