Evangelicals and Gays: A New Medium of Engagement

This article appears as a part of the Consultation on Re-Envisioning the Relationship between Evangelicals and Gays. The Consultation invites a broad variety of perspectives on what that relationship ought to be, and how it might be made so.

Andrew Marin is President and Founder of The Marin Foundation, a non-profit that builds bridges between religious communities and gay, lesbian, bisexual, trangender communities.  His book, Love is an Orientation: Elevating the Conversation with the Gay Community, has received more awards than any other individual book in the history of InterVarsity Press. 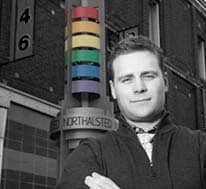 I write this article from Eastbourne, England, where I am on a month-long United Kingdom Bridge Building Tour working directly with the conservative Christian and gay, lesbian, bisexual, and transgender (GLBT) communities through a variety of secular and faith-based organizations, churches, political groups, universities, and seminaries. These groups came together, in many cases for the first time, to join in constructive dialogue on a national level. This past month has taught me that neither space, nor culture, nor time separates the pervasive struggles between the Church and the GLBT community. Whether this disconnect is openly discussed, as it is within the American arena, or, as a British evangelical vicar says, "just seethes in silence around the UK," the answers sought on the path toward some semblance of reconciliation are arriving at a pace much slower than either group would wish.

Thus the culture war, in clamor or in silence, rages on. And it will do so until one of the communities finally gets over its pride and picks up the cross to bear the blame for both groups -- to bear the blame for the negatively imputed cultural perceptions, for the evil agendas, for everything that has been done in vain against the other. Yet both have proven time and again that they are too stubborn to admit that the whole system, created by each in visceral retaliation against the other, is completely wrong. And if the institutions cannot bring themselves to do it, what does it mean for courageous individuals to take the first steps into the unknown by humbly bearing the blame when the fault might not truly be theirs, yours, or mine? A commitment to bear the blame for the sins of both sides does not make the situation right. In fact it makes this whole thing that much more wrong. But my experience has shown me that it is necessary. Someone must bear the burden if anything is to change from this point forward.

"Wisdom," Jesus said, "is proved right by her actions" (Matthew 11:19). The conventional "wisdom" thus far in the narrative of the broken relationship between the GLBT and evangelical communities has been constructed through the cognitive intellectualization of ‘action.' The conversation has been dominated by abstract questions like "How should we interact?" and "How have we gotten to this place?" For far too long, the accepted paradigm of engagement has been entirely devoid of relationship. Yet I will not accept this "accepted" medium. It's not acceptable. And it's not working.

It is time to take the relational structure that we have inherited between our communities and replace it with the actions we have longed for "the other" to do. We have tried arguing, pointing, and pouting. It has not worked. We have tried waiting for things to change. Nothing has changed. The only thing we have not tried, it seems to me, is to prove our wisdom in the work of reconciliation through tangible actions of peaceful and productive engagement -- not in an abstract intellectual world, but in real time in the real world. As someone said: On earth as it is in heaven.

Here are three new starting points -- paradigmatic, social, and theological -- for all of us to shift our strategies of engagement in this fraught, uncomfortable, and potentially beautiful struggle of establishing Kingdom (Matthew 13:24-30) in the relationship between evangelicals and the GLBT community.

I am not naive enough to expect that everyone else will believe exactly how I do. Yet the relationship between evangelicals and the GLBT community has been based on the thought process: "I am going to convince you to drop everything you believe and accept everything that I believe politically, socially, scientifically, and theologically." To be clear, that is never going to happen. This paradigm of engagement is flawed from the outset because it instantly invalidates the other's journey. Instead of working off of this false model of your own ideal situation, we should all shift our understanding to create intentional outlets on a regular basis, where together with others, the word ‘no' is actually a legitimate word. Therefore stop trying to fight against an oppressed construction of ‘no' and start learning to engage it.