Faith Amidst the Battle

An Interview with Michael Yon
By Timothy Dalrymple 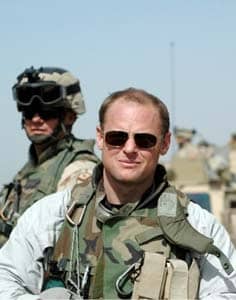 Michael Yon is a former Green Beret who has become the premier independent combat journalist of our time. In 2004, shortly after Michael published his first book, the memoir Danger Close, he received the news that two of his friends had died on consecutive days in Iraq. Concerned that the war was being lost, and told by friends that the American media was not relating the whole story, Michael left for Iraq to learn the truth for himself and tell the story of the war as an embedded reporter without prejudice or favoritism. Initially he financed the trip himself, but he began to receive contributions from readers of his online magazine, MichaelYon-Online.com. Michael was among the first to describe the violence in Iraq as a civil war, the first to say we were losing the war in Afghanistan, and the first to claim "the Surge" was a success.

Now embedded in Afghanistan, Michael has spent more time on the ground in Iraq and Afghanistan than any other reporter. His work has been featured on "Good Morning America," The Wall Street Journal, The New York Times, CNN, ABC, Fox, and hundreds of other major media outlets around the world. His second book, Moment of Truth in Iraq, was published in 2008. Michael's "Dispatches" are remarkable for their authenticity and detail, and the extraordinary photos and maps that provide colors and context to his stories.

You have been reporting on these conflicts, often as an embed, for six years now. You know the soldiers well. Is faith a big part of the lives of the soldiers you have come to know?

Faith is definitely important for a lot of the soldiers. There's no question about that. Religious ceremonies of all kinds are held frequently in the camps.

One thing seems to be true as a general rule: people of strong faith tend to be stronger individuals overall. Their faith gives them strength in many ways. That's just a generalization, of course. I can easily search my memory banks and find very strong soldiers who were not people of faith. But actually, as a general matter, it's pretty clearly true. And it's obviously of great benefit to those soldiers.

Are there any chaplains who come to mind as particularly strong examples of faith in the midst of the hardships of war?

I've always wanted to write more about the chaplains I've come to know. I haven't really done that, except once in 2005. There was one chaplain in particular whom I wrote about [in his famous dispatch, "Gates of Fire"], named Chaplain Wilson, a part of the bedrock of his unit.

It takes a special chaplain to be a central part of the unit. Chaplains, unfortunately, are usually more like appendages to the unit. They keep more in the background. Soldiers come to them for various religious services, but the chaplains are rarely front and center.

Chaplain Wilson was different. He was highly regarded because he was such a strong individual who would go out into the fights, right out there in the middle of the mess. He was one of the really good people that gave you the strength to face the really bad people. I think it's fair to say that he bolstered the courage of a unit that was already courageous to begin with.

Chaplains can also serve as moral guides. Once Chaplain Wilson was involved in discussions on how we should treat the enemy. I was having lunch with him and two other officers. The others were upset that we were giving [medical] treatment to the enemy. Those discussions happened frequently. The others were asking, "Why should we treat these guys? Why should we put just as much effort into helping them as we put into helping our own?"

Chaplain Wilson kept saying, "That's the difference between us and them. Don't you get it?" He often fought an uphill battle conveying to people that that is one of the huge differences between us and the terrorists: we do even the things we don't want to do, because they're the morally correct things to do.