Female Sexuality: What the Muslim World Can Teach Us 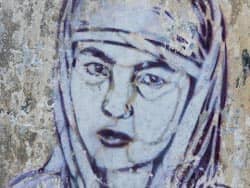 Western and Eastern authors have historically painted a picture of the Muslim world as one in which the sexuality of Muslim women flourishes behind closed doors. It seems that in these secluded spaces a secret is passed from generation of women to generation of women about how to actively create a vibrant sexuality within the private sphere. In light of the public-private distinction that is the essence of this sexual presence, I often wonder about the health of Muslim women's sexuality here in America, where the social distinctions between private and public are disappearing in the face of reality television shows and social networking sites like Twitter and Facebook.

Many American Muslim women endorse the same public-private distinction found in the Muslim world, but where can these women turn to develop and explore their sexuality here in America? Given the growing trend to abolish personal boundaries with ever-invasive social media and the holistic integration of the sexes, there is an essential lack of established women-only spaces for American Muslim women.

To qualify, I am not condoning or celebrating forced gender segregation. In fact, the idea of Muslim women's sexuality thriving in private is not a phenomenon exclusive to countries that impose strict gender segregation. Both Naomi Wolf and Fatima Mernissi have written about the vibrant, private sexuality of the women of Jordan, Egypt, and Morocco -- all countries where women enjoy relative freedom of mobility. From their accounts, I deduce that this sexuality exists away from the public eye at least in part because these women choose to keep sexuality alive and healthy where it is considered most appropriate -- in private.

These private spaces are distinct from what many American Muslim women often think of when they hear the words "female-only spaces"; I am not talking about women's sections in mosques. In fact, I believe that the full partitioning off of the sexes in religious centers promotes unhealthy gender relations and prevents women from becoming functioning members of our religious community. The private spaces referred to in this article are instead institutionalized social spaces in which women are free to explore all aspects of their identity -- defining their sexuality as part and parcel of their vulnerability and even spirituality. And, as a further note of clarification, these private spaces are not the over-sexualized harems that often show up in Hollywood movies; they are places where women can form an identity, embrace the beauty of being a woman without feeling pressured to starve their way to a size zero, learn from and support one another, and flourish among other women.

Without the appropriate private spaces to develop their sexuality, women are notably at risk because female sexuality can easily transform from a source of a woman's power to a source of emotional weakness. Here in America, the pervasiveness of blatant, public sexuality has resulted in female sexuality becoming incredibly accessible and attainable. With no shortage of supply, American men are now able to dictate the terms of their access to female sexuality. One such example is the rise of casual sex -- an incredibly male-centric view of sex and pleasure, especially given that women are predisposed to suffer more emotionally from casual sex because of the higher amounts of oxytocin, a bonding hormone, that they release during physical intimacy. As Carrie Lukas wrote in The Politically Incorrect Guide to Women, Sex and Feminism, "Women are still more vulnerable than men, and while many women have embraced a casual sex ethic, they often express regret after engaging in casual sex."

Yet more and more American women have accepted casual sex as an appropriate channeling of their sexuality because, with the mystery and allure of female sexuality severely muted by the public nature of American sex, women have lost the sexual advantage and men's sexual ideals now dominate sexual practices. While in the Muslim world, men are so aware of the power of female sexuality that they, according to Mernissi, possess a palpable fear of being abandoned by their women, it seems that women in America are taught to tiptoe around the idea of commitment out of fear that their men will leave them for greener, less constricting pastures.

The male-centric sexual mores that dominate American society have particularly negative consequences for American Muslim women, for whom casual sex and casual relationships with men are usually not an option. For these women -- both those with and without hijab -- the choice not to expose their sexuality in public spaces can have painful consequences as they are easily overlooked by American Muslim men as being too cold and rigid to be approached. If the Muslim world understands the absence of public female sexuality as testimony to its vibrant presence in private spaces, in American Muslim communities this absence is often seen as testament to the fact that American Muslim women's sexuality does not exist at all. Furthermore, without easy access to female sexuality, men of the Muslim world are motivated to pursue what lies hidden behind the public-private divide according to the terms dictated by the women they pursue. But here in America, American Muslim men no longer have to jump through hoops for women's affection and can afford to be distracted by the sexiness abound.