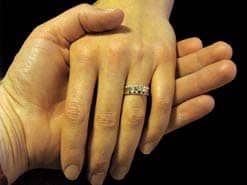 Sex is complicated. Why we engage in it is a matter of emotion, psychology, hormones, genetics, pop culture, high culture, low culture, spirituality, love, lust, and destiny (or not). I tend to be skeptical that there is one true approach to it, but I can think of several unhealthy approaches (heck, I embody at least a couple). In our church, where a belief that marital relationships and sex continue beyond this life is common (even though it is of murky doctrinal origin), I tend to think it is even more complicated. The traditional Christian approach of general disapproval of sex is more consistent, as is the modern amoral outlook. It's appropriate (even necessary) for us to argue for and to seek a position between those two, but LDS church members tend to adopt aspects of those approaches instead of figuring out our own path. Generally speaking, we tend to approach sexuality as if it is the most important thing on earth and, therefore, we should know as little about it as possible.

Over conference, there were two talks that focused on issues of sexual immorality in particular. Elder Holland's Saturday afternoon address and President Monson's Saturday evening address both referenced pornography and both offered advice regarding controlling lust (along with subsidiary issues). What I write today is going to draw on both talks, but my purpose is to get one point across that neither addressed directly. As I've said before, I think our discourse on sexuality is drowning in useless euphemism and misdirected effort. So, I'm going to be blunt and explain what neither of these great men explicitly stated (although it is implied in both talks): Orgasm is not the end of your creation.

This isn't to say that orgasm (male or female) is a bad thing. I don't believe it is. It isn't, however, a universal good. Like so many of our bodies' involuntary responses, it is morally neutral. Its goodness or badness is determined by the use to which it is put. If it helps cement a couple together, great. If it is put to other uses, we may have a problem. More on this in a minute.

President Monson more directly addressed pornography, so I want to tackle his talk first. Its title is "Preparation Brings Blessings" and Pres. Monson is seeking to help the young men of the church prepare themselves for missions, marriages, and life in general. He begins with an admonition to behave appropriately while dating; seek the advice of your parents when dating; present your best self; and find good friends with common values. Then, after admonishing against cheating in school, Pres. Monson turns to our entertainment choices. "Whatever you read, listen to, or watch makes an impression on you." He notes the possibility of becoming addicted to pornography. He suggests that if we have a question about some form of media, we should simply avoid it. Reminding us that we are the temples of God, he asks us to keep the word of wisdom, but also to make good choices in music. Then, returning to themes of sexuality, he commands abstinence before marriage and fidelity afterward. "Tears inevitably follow transgression."

Then, he refers to President David O. McKay, who taught, "I implore you to think clean thoughts... Every action is preceded by a thought. If we want to control our actions, we must control our thinking." Pres. Monson adds, "Brethren, fill your minds with good thoughts, and your actions will be proper." The battle for control of our thoughts is important. Media and advertising understand the primal desire for sexual fulfillment and they use that desire to sell. Confronted with sexual messages daily, it is no wonder that many church members assimilate them. Pres. Monson advises us to turn to the Holy Ghost in moments of temptation. "Remember that prayer is the passport to spiritual power." That's likely better advice than any I'd offer, so I'll let it stand.