Musings from a Meandering Pilgrim

This is the first in a series of posts from spiritual director and poet Rebecca Cole-Turner from her pilgrimage abroad.  First stop Florence, Italy during Holy Week. 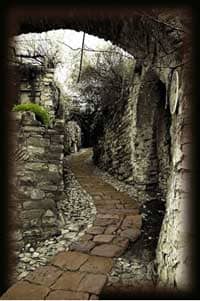 A midlife crisis may not be such a bad thing after all. That's when Dante begins his Divine Comedy, lost in a "dark wood" at 35 years old:

Midway along the journey of our life,

I woke to find myself in a dark wood,

for I had wandered off from the straight path.

~ Canto I, The Inferno, The Divine Comedy, translated by Mark Musa

My own moment of creative lostness came in 2004 when I was 53 (the new 35). Our daughters were grown. My teaching job was adjunct (in other words, temporary). I had no pets and no plants. I woke up one day realizing that nothing stood between me and the door. If I chose to go on a journey, all I had to do was lock it and leave. In short, I was truly free to be/become/do whatever it was that I hadn't been able to pursue for the first half of my life.

This newfound freedom was a heady thing: tantalizing, invigorating, mesmerizing, intriguing, and yes, somewhat scary, too. What in the world am I going to do now? The one thing that I was committed to doing was finishing my certificate program in spiritual formation at Pittsburgh Theological Seminary, which required that I go on a ten-day pilgrimage.

So I went to Italy. It was probably the fact that I stayed for five weeks that set me on my new path. Or it might have been staying for two weeks in Florence, the city that is known as the seat of the Renaissance and for inspiring renaissance in the spirits of all who journey there. Or it might have been the silent retreat at a little hermitage with two delightful Catholic Servite monks up in the Chianti hills. Or it could also have been the pilgrimage I made with people from my spiritual formation program to sacred sites in Rome, Subiaco, and Assisi.

Whatever inspired the life change, by the time I returned to the U.S., I was transformed. I wasn't out of my "dark wood" yet. But I had become a pilgrim, like Dante the Pilgrim.

I know now that all of us are pilgrims. From the moment we are born to the day we die, we are all on a unique path to discovering ourselves in relationship to the Holy. But until that summer, I didn't know it in the way I have experienced it since then. I have learned to embrace a new way of moving in this universe that is a perpetual and purposive quest for the Beloved, for the Goodness that is in all life. Whether my days take me in a new direction at home or lead me to a new country abroad, I try to set out on a path of God-discovery in all that I see and experience, in every person I meet and in all that I choose to do.

For me, pilgrimage involves a new direction, a change of heart, and an eagerness to be led in new ways and through new ideas, people, and experiences by my traveling mate, Wisdom. Sometimes, my husband is with me; other times I go alone or with another friend. But always, always, the Spirit goes with me and is my constant and loving traveling companion.

So now I think of myself as simply una pellegrina errante, a meandering pilgrim, both loved and guided by the Good Shepherd.

In The Pilgrim and the Book, my friend Julia Bolton Holloway writes that the

first occurrence of the word for "pilgrim" in the Bible is in Genesis 23:4, "in Abraham's phrase, ‘strangers and pilgrims.'" Strangers and pilgrims! What a profound dichotomy! Sometimes we travel because we are pushed out, forced to leave -- divorced, disowned, disinherited. Sometimes we travel because we are searching, seeking to find that place of spiritual wholeness that will be our true home. The challenge is to turn the forced travel of the stranger into the spiritual discovery of the pilgrim. How can I go from disruption to discovery? How can I turn mid-life exile into the path that takes me home?

The word peregrinus embraced the oppositions of exile and pilgrimage, of the profane and the sacred. Medieval pilgrims embraced this doubleness. There were those who vowed a religious pilgrimage and performed it for the love of God, being thereby an Abel. There were those who committed a crime, had been tried in ecclesiastical or secular courts and been sentenced to penitential exile, being thereby as a Cain. A Cain-like murderer could become a pilgrim, rather than be hanged... (p. 3).