Sexual Abuse: Protecting the Church or Killing It? 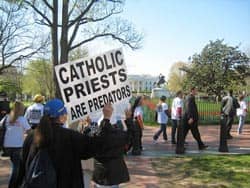 I tried to find a witty title for this ... but my heart was too heavy. I've had a few friends recently who have suggested that I needed to write about the clergy sexual abuse scandal but it's taken me a few weeks to work up the courage and to deal with my own heartache about this.

The devil is winning in this debacle. He may have tried for centuries to ruin the Church through bad Popes, the Inquisition, and the Crusades but if he were ever going to win, it would be now in the clergy sexual abuse crisis.

First, this is sin of the highest order: alleged priests who abused the trust of their people to satisfy their own needs and with the most vulnerable of their parishioners. When I think of what these guys have done, all I can see are my nieces and nephews, and how beautifully innocent and trusting they all are, and how they really do believe that the adults who are responsible for them will provide the best for them... and I see that beautiful innocent glimmer in their eyes, that look of delight at new things, that silly laughter at the most ridiculous of things... and I think of how these men when they raped these children not only robbed them of their sexual innocence, but of their trust and capacity to be open and loving and believing in the goodness of our world... and I am repulsed.

But then I think of the bishops who had to understand, and still did nothing. No, wait... they did do something. They moved these men around so that they would have other victims on whom to prey, and they did it to protect the reputation of Holy Mother Church... because of course, these days, Holy Mother Church's reputation certainly is in good standing across the world, thanks to them.  And for their efforts, some of them even got nice jobs in fancy churches in Rome when their own parishioners and priests raised such a commotion that they no longer could function in their own Archdioceses.

Yes, I understand that the problem is complex. Our society has changed a lot around this issue in the last 30 years. After all, when I was a boy, every family had an uncle that your parents told you to stay away from, or to make sure to never be alone with. Or maybe it was a teacher or a coach, or even a priest... Yet, your parents would never have considered going to the police about it. It was unheard of. You wouldn't dare air your dirty laundry in public. Instead, you dealt with that stuff privately, because sex was private, even if it was illegal and immoral...

So I'm not sure that the Church back then handled these problems any differently than anyone else. Don't talk about it. Hope the problem goes away...

But here's where it gets messy: the Church should know better. And more to the point, the Church has spent its long history telling every one else how to conduct their moral lives. The Church has certainly spent a good deal of time preaching about sex, about when and where and how and with whom. So to many people, it feels really duplicitous that the Church's biggest scandal in its history has to do with sex, and covering it up... and the backlash from this crisis in the press and among its people I think has much to do with that.

This scandal isn't about celibacy. There have always been good celibates in the Church. People, both ordained and lay, who have forsaken genital expression of sexuality for the sake of the kingdom. They have lived joyful lives, and have been wonderful countercultural examples for our world.

Should priests be celibate today? No. Celibacy should be its own charism in the Church, for those who are called to it. For the first twelve centuries of the Church's history priests were married. Today, if you want to be a married priest, you need to be an Anglican unhappy with the ordination of women and gays; then you can convert to Catholicism and remain a priest and bring your wife too. Enough said about how insulting that is to the thousands of former Catholic priests who left the priesthood to marry.

Is this crisis about being gay? NO! Gay people don't rape children. Pedophiles, both straight and gay, rape children.  This crisis is instead about an unwillingness on the part of the Church to deal honestly with the psycho-sexual health of those who are called to lead in the Church -- both the priests and the bishops, both gay and straight -- and to listen to professionals who are not in the Church, but who know much more about these issues than the bishops and rectors of seminaries do.

It's really hard being a priest today. Sometimes, when people in non-Church settings ask me what I do, I lie. I tell them I'm a therapist or a musician... it's just easier than trying to explain it all, or deal with the stares or the silence. When the crisis was at its worst in Boston, I remember stories of priests being spit at, and I will always remember the night when I was in a restaurant and had to listen to the obscene jokes about priests and altar boys at the next table. It haunts me still...