Shoes protect our feet, they enable us to go anywhere we want without concern for what the terrain is. We pay a lot of money for very uncomfortable ones, and sometimes our favorites are the ones we have had for years. I feel fortunate I own more than one pair.

Shoes can be easily overlooked.

Not on the bank of the Danube River in Budapest.

A simple memorial has stood there since 2005. A memorial you may just miss unless you get close. 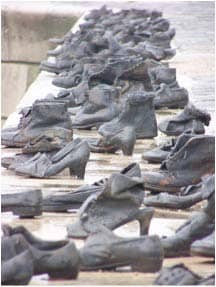 They are old-fashioned. They may just look like some crazy art nouveau thing.

Until you get closer.

The unrest in Budapest regarding the Jews culminated on the night of January 8, 1945. Jews in Budapest were rounded up and made to stand on the bank of the Danube River... as pictured above.

Sometimes, two people were chained together. One was shot and the other was dragged into the water where they drowned.

Sometimes they just shot people and pushed them in the icy waters.

Sometimes they attached weights to the people before they shot them.

All that was left was their shoes. Their valuable shoes.

After all, a dead person doesn't need shoes.

This mass murder was perpetrated by the Arrow Cross party whose members were big fans of Hitler and his policies. They were only too happy to help along his final solution.

I look at my shoes differently now. They aren't just a fashion accessory or necessary evil to get from A to B. They are a reminder that I am alive. They remind me that I live in a free country, in a world that will not tolerate this type of behavior. They tell me my extended family did not die in vain.

Blessed are You, Adonai, our God, Counselor of the universe, the True Judge.

This is what we say when we hear of someone passing.  It is our way to say that we accept the unacceptable.

For short, Baruch Dayan Emet. Blessed is the True Judge.

Talia Davis is the daughter, granddaughter, and great-granddaughter of rabbis. While her direct family had immigrated to America prior to WWII, she lost extended family to the Holocaust. Her great-grandfather stood in protest of Hitler's policies in America, wearing a yellow star of David on his clothing in an attempt to bring awareness to the horrors he knew were being perpetrated against the Jews in his parents' homeland of Germany. Talia directs the Jewish Portal at Patheos and manages the site's online community.