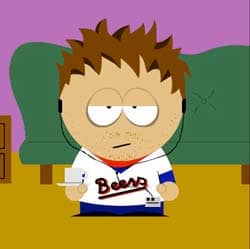 What happens when two guys with no understanding of Islam are given a national platform to air their views about the faith? You get a representation of the Prophet Muhammad that is insulting and demeaning. This outrage, predictably, angers the Muslim-American community. The two goons behind Revolution Muslim have been so fetishized by CNN, that the Muslim-American community is starting to take matters into their own hands in order to stop these Islam-bashers from continuing to defile the religion.

The creators of South Park recently aired their 200th episode, in which they almost depict the face of the Prophet Muhammad. Interestingly, they have aired the face of Muhammad before, but because of the Danish Cartoon Controversy, Comedy Central told the creators they could no longer show him. The creators attempt to deal with issues of free speech and censorship in their 200th episode were upended by the two clowns of Revolution Muslim, who have issued a thinly-veiled threat against the show's creators.

These two buffoons (I keep emphasizing that there are only two of them) decided that they encapsulate all the learning of the various Muslim traditions and could speak out for the Muslim community. The reality is that there is a wide variety of responses to the depiction of Muhammad amongst Muslims. I had students Tweeting me to watch the episode. I watched it and thought it was in poor taste, like everything else South Park does. That does not mean I did not find it funny or insightful. Some would argue that this is a Shi'ah tendency, to depict Muhammad. While there is probably some correlation to being Shi'ah and having pictures of Muhammad and his family, there are numerous Sunni Muslim communities who do not object to figural representation. We all agree that these images are not for worship purposes.

What Revolution Muslim seems to be doing is taking their "Islamic learning" from CNN -- after all, this dim-witted duo is only known because of CNN. As Aziz Poonawalla points out, two people do not equate to an entire community. The two of us represent a counter-voice that is not on CNN, because we are educated and are representative of most Muslims. For CNN, there is not a story in Muslims being normal.

I would be surprised if more voices do not come out calling the Revolution Muslim duo a cancer on the Muslim community. Unfortunately, because CNN acts as their press agents, somewhat intelligent people feel confident making statements like "No other religion threatens violence over how they are portrayed in the media and no other religion has proven powerful enough to frighten the media into submission like Islam." Two people represent an entire religion of 1.6 billion people. I wonder how this writer would have reacted if 1.6 billion actually did get upset by something? It also buys into popular Islamophobia and ignores the reactions to movies like The Last Temptation of Christ and Priest.

The reality is that Revolution Muslim has no understanding of the faith, other than what will get them on TV. They know nothing of tradition, history, or culture. It is a sad state of affairs when two lonely boys with an internet connection get as much airtime, or more, as legitimate news stories and community leaders. Unfortunately, these two, unlike the creators of South Park, are not funny. They are just in poor taste.

This article was first posted at Religion Dispatches, a Patheos Partner, and is reprinted with permission.

Hussein Rashid is a native New Yorker and proud Muslim. After finishing his undergraduate degree at Columbia University, he completed a Master's in Theology at Harvard where he is now finishing his Ph.D. in Islamic Cultures. He works with major political figures and institutions, advising them on the history and culture of Muslims.