The Strength to Keep Fighting

An Interview with Michael Chang
By Timothy Dalrymple 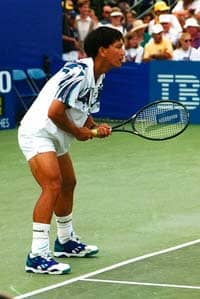 Michael Chang was born in Hoboken, NJ, in 1972. He won his first national title, the Junior Hard Court Singles, at the age of 12. At 15, he won several national titles in the 18-year-old category, entered the professional tour, and became the youngest player ever to win a draw match at the U. S. Open. When he won the 1989 French Open at the age of 17, he was the first American player to win since 1955 and the youngest player ever to win a Grand Slam tournament. His 1989 title is equally remembered for an epic match against Ivan Lendl, when Chang overcame severe leg cramps but refused to give up. He adopted unorthodox tactics, like hitting the ball high into the air to slow the game, receiving serves near the center of the court, and even serving underhanded in order to break Lendl's concentration. Chang fell to his knees and broke down in tears when the match was won. Seven days later -- and one day after the height of the Tiananmen Square Massacre -- Chang won the tournament in a five-set victory over Stefan Edberg.

As an Asian-American, Chang was a trailblazer in his sport. His record as a year-end top-ten ranked player for six consecutive years in the 1990s is matched only by Pete Sampras, and he is one of very few players to win ATP titles in three different decades. As his peak, he was ranked no. 2 in the world in 1996, as he was runner-up at three Grand Slams in 1995 and 1996. Known for his extraordinary speed and fighting spirit, he is widely considered one of the greatest tennis counter-punchers of all time. Chang is also known as an outspoken Christian and a committed philanthropist. His Chang Family Foundation, founded in 1999, seeks to share the gospel through local and international sports and Asian outreaches. He was inducted into the International Tennis Hall of Fame in 2008.

He was interviewed for Patheos by Timothy Dalrymple.

At the height of your tennis career, you were outspoken about your faith. How did you become a Christian in the first place?

I was raised going to church in the San Diego area, because my parents thought it was a good thing to go to church. My grandparents were very involved, and they helped to found a church in Thousands Oaks. I didn't really enjoy church when I was growing up. It was tough to keep my attention. But my grandparents prayed for me constantly, and gave me a Bible when I was an early teenager. It went straight up on my bookshelf.

One particular Sunday, at my grandparents' church, an elderly lady spoke in the main sanctuary. She was incredibly engaging and funny. Even to this day, I remember exactly what she talked about -- and it stirred my heart. I was 15 years old, and I had a lot of questions about life. I was trying to figure out who I was and what I should do with my life. I asked questions about friendships and love and what it means to live in this world. After hearing the sermon, it seemed that the Bible would be a great place to look for answers.

I pulled the Bible off my bookshelf and started looking at the index for the subjects that interested me -- and the first one was love. I looked at 1 Corinthians 13. "Love is patient, love is kind. . ." I thought, "Wow, this is good stuff!" So I went through other subjects, and eventually it was a habit every night to look up something new. From there, I read about Jesus' life, and started to see things happen in my own life that could not be mere coincidence. I started to realize that God was real, and He was trying to get my attention. From there, my faith grew.

When did it become clear to you that your athletic life and your spiritual life were closely related?

In retrospect, God's timing was incredible. I came to know the Lord that first year I was on the professional tour -- before all the fame and money, before the French Open in 1989. If I had experienced all of those things before I became a Christian, it would have been more difficult. In the eyes of the world, what is labeled as success is very different than what is labeled as a success in the eyes of the Lord. If I had already been a success in the eyes of the world, if I had achieved all those things "on my own," then I might not have been able to see my need for God.

But because I came to know the Lord before all that, my definition of success and my purpose in tennis were different. I was still out there trying to beat my opponents and win titles. But I realized that the gifts I had been given through the sport of tennis were not to be used selfishly, for my own glory. My talent was a gift given by God so that I could touch lives in any and every way I could; I was given a platform to proclaim God's word and share everything I could.