An Unconventional Marriage: A Judeo-Christian "I Do"

As part of our Public Square on Interfaith Marriage this week, we invited several couples to share their personal stories with us at Patheos.  Here, Christian Leanna Creel and her Jewish wife, Rinat Greenberg, speak about the joys and challenges of interfaith marriage and parenting. 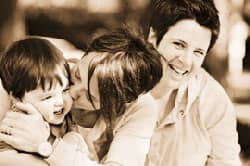 Tell us about how you met, and if you had any concerns or questions up front about dating someone of a different faith.

Leanna:  We met through a mutual friend. One of the first things I learned about her before meeting her, was that she loved G-d. I was intrigued, even though she was Jewish and I'm a Christian. Of course, I wasn't thinking down the line how this would affect raising kids. At the time, I could tell she had the light of G-d in her spirit, and that was attractive to me.

She was freaked when she first saw my extensive cross collection, crosses from around the world. Over my bed. I've taken those down, which is kind of sad, but I understand that being raised Orthodox, the cross is a symbol that she obviously doesn't relate to. But more than that, her mother would have a heart attack. So, an early concession.

Rinat:  I'll never forget the first time I walked into Leanna's apartment. There was a group of us and we were getting a tour. When we saw her bedroom, she had what looked like thirty crosses above her bed that she'd collected from her travels around the world. In all honesty I was stunned. As hard as it is for me to admit, I feel like I was pre-programmed to have a visceral reaction every time I see a cross. I thought to myself, "Oh well. I guess we're not going to be able to date. She's just got too many crosses on her wall." Thankfully, I've worked through that. I've even managed to live with a Virgin of Guadalupe painting on the wall. That felt like a big sacrifice.

Did your parents or family members have concerns about your relationship?  Did either of you come from an interfaith marriage?

Leanna:  Well, I think the interfaith thing was trumped by the gay thing. So our parents had already been through that shock. But I knew they would love her, and they have noticed I'm a nicer, better person when I'm with her. My dad is a little worried about me, and has reminded me that I don't have to give up who I am, and what I believe in. My parents got a divorce the year after we got married. And now both of my parents are dating Jews. So who knows, maybe we inspired them.

Rinat:  I definitely didn't come from an interfaith marriage. In fact, there used to be a joke in the family where I would ask my mother, "Would you rather me end up with a non-Jewish man or a Jewish woman?" To which she'd respond, "Don't be so ridiculous." She never answered the question because I knew she'd have a problem with both scenarios.

I was raised as an observant Jew. We kept a kosher home. I went to a Jewish school my whole life, we observed all the holidays and went to temple every Sabbath, etc. Somehow the thought of "marrying out" which is how it was referred to, was superseded by my sexuality. My brother is now very religious. His community is Hasidic. But thankfully the people he chose to listen to put his relationship with family first. I'm not saying that my lifestyle is his ideal for me, but Leanna and I always feel welcome in their home.

Leanna: The best part, and I know Rinat will agree, is that we don't have any conflicts over holidays. We've noticed that with our siblings, there's tension with the two families, one often feeling like things are out of balance, or one always wanting more time. We get to show up for each of our respective holidays and don't have to split our time.

Leanna:  I've realized that it's easier for me to join a temple than for Rinat to join a church. Being a liberal, progressive Christian, I've often wondered if I'm more Jewish. If I want my family to worship together in a spiritual community, it's going to have to be in a temple. The hard thing is, I've been going to the same church for fifteen years, and Rinat isn't involved in a temple. However, we've recently discovered an amazing conservative temple and rabbi that we both really connect with. It feels like we're being called to join this community as a family. It may sound strange for a Christian, but I feel more at home here than in most churches.

Rinat:  I think we both have a similar need for a community of faith, a need to be inspired, motivated . . . moved. So it doesn't feel like our religious backgrounds are at odds. We somehow meet in the middle.

Article Continued On Next Page
Page: 1 of 3
4/29/2010 4:00:00 AM
About Kevin Juhasz
Kevin Juhasz is a content manager with a Colorado-based marketing company and the owner of <a href="https://www.thewritecontent.net/about">The Write Content</a>, which provides writing and editing services. He has more than 25 years of writing and editing experience with websites, newspapers, magazines, trade publications and more. Kevin has covered news, sports, entertainment, technology and a wide variety of other subjects.