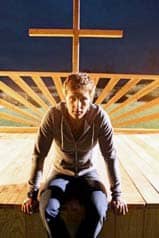 Next week, I will be participating in a conference, "Open Graves, Open Minds:  Vampires and the Undead in Modern Culture," at the University of Hertfordshire in the UK.  I will be presenting a paper entitled "True Blood, Real Life?: Religious Fundamentalism, Gay Rights, (Non)Violence, and the American South in True Blood."  Below is my section on the portrayal of religion in the series.  I welcome any and all feedback from both fans of the show or fans of the vampire genre in general.

As a native of the American South and a student of religion and popular culture, I am both attracted to and repelled by the depiction of religion in True Blood. While it is highly caricatured, it still draws attention to some of the more subtle shortcomings of American evangelicalism. Furthermore, the nature of the series' representation of religion falls in line with a long history of film and television religiosity.

All that viewers need to do to get a sense of religion in True Blood is to watch the title sequence, which some critics claim is better than the series itself. Unlike other series that might change up its opening credits, True Blood's has remained the same over twenty-four episodes, thus consistently establishing a particular tone.  Accompanying Jace Everett's theme song, "Bad Things," viewers are hit with a barrage of images that begin with a swamp and conclude with an old-fashioned outdoor baptism.  In between, images of sexuality (flashes of couples engaged in sex or a couple gyrating on the dance floor) are rapidly juxtaposed with clips of highly ecstatic religious ceremonies (people jumping up and down during worship services, dancing, or being slain in the Spirit).  The line between Saturday night and Sunday morning in True Blood's title sequence is non-existent.  James Poniewozik of Time writes, "It's a fever dream of Eros wrestling Thanatos in the middle of a tent revival."

This title sequence is problematic for a number of reasons.  First, it depicts either African American or significantly racially integrated worship settings that never feature prominently in the series itself.  In fact, we only see the interior of a church, The Fellowship of the Sun, at the end of the first season and in a couple of episodes in the second.  Second, the juxtaposition of erotic and religious images sexualizes American evangelical life, particularly the African American variety.  As such it continues a stereotypical portrayal of evangelicalism that finds precedent in films like The Green Pastures (1936), Hallelujah! (1929), and Elmer Gantry(1960), to name a few.

Along with the title sequence, the episodes offer very little definitive information on the type of religion that the residents of Bon Temps practice.  If I had to guess, I'd say it is most certainly Protestant, Baptist, and perhaps even Independent Baptist.   Taking religious historian Bill Leonard's study of Independent Baptists into account, and substituting liberals with vampires (a much safer metaphor than the homosexual one, I dare say), then this comment might be helpful. Leonard writes, "[...They] refuse to associate with any groups that they consider to be theological liberals. [...] For these Baptists ‘to know a liberal is to be a liberal;' thus they reject any participation in community or ecumenical alliances that might include those whose views and practices are heretical."  The most conservative residents of Bon Temps make no distinction between vampires and "vampire sympathizers" in doling out their disdain.

Leonard's description of Independent Baptists' reactions to homosexuality might as well be a description of The Fellowship of the Sun's, True Blood's only explicitly religious organization, reaction to vampires.   Leonard writes, "Independent Baptists are among the most outspoken Baptist opponents of what they often call the ‘homosexual agenda,' publishing extensive criticism of the sin of homosexuality and the warning of the dangers that homosexuals and their supporters pose to ‘family values' in the American Republic. They insist that gays claim ‘rights' to which they are not entitled and are determined to secure laws that permit same-sex marital unions."  Unfortunately, The Fellowship is, more often than not, a telling reflection of American evangelicalism in both appearance and theology, or lack thereof...more on that in a moment.