By Rick Hanson and Rick Mendius

In a way, the methodologies of Buddhist thought and science are essentially similar. ~ The Dalai Lama 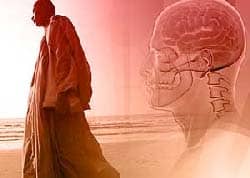 We all want to be truly happy. The question is, how?

In Buddhist practice, the "how" includes gradually transforming the mind -- the seat of clinging in all its forms -- to increase the causes of happiness and reduce the causes of suffering, ultimately, to complete Awakening.

But what does it mean actually, to transform the mind? (We mean "mind" in the ordinary sense, as the realm of awareness, thoughts, feelings, sensations, images, desires, personality patterns, etc.)

Many people, us included, believe that there are transcendental factors at work in the mind outside of the realm of matter and energy. But apart from those potential influences, mind must be what the nervous system does. What else could it possibly be?

While acknowledging the possibility of the transcendental, for the rest of this article we'll stay within the framework of what's known scientifically about the mind and brain, and explore how you can use that information to support your own path of practice.

For example, psychology, neurology, and "contemplative neuroscience" have recently made discoveries about attention, cultivating positive emotions, and controlling craving that support the development of virtue, concentration, and wisdom. Further, the growing synergies between science and contemplative practice are a vital resource for a world poised on the edge of the sword, since the way it tips will depend a lot on whether enough people become more skillful at managing the reactive patterns of their minds -- and thus, their brains.

Scientists have shown that your mind and brain routinely change each other. This fact opens many gates to deepening practice.

For example, the mental activity of meditation changes your brain in numerous ways, including:

As the psychologist, Donald Hebb, put it: "Neurons that fire together, wire together." Fleeting thoughts, feelings, etc., leave behind lasting marks on your brain -- much like a spring shower leaves little tracks on a hillside -- which form the tendencies and views that make us suffer, or lead us to happiness. This means that your experience really, really matters. Which is a profound and scientifically substantiated rationale for being kind to yourself and creating the causes of more wholesome experiences and fewer unwholesome ones.

And as your brain changes over time, so does your mind. For example:

In sum, with a little skillfulness, you can use your mind to change your brain to benefit your whole being -- and everyone else you affect.

Taking in the Good

So let's consider how this could actually work, in an extended example.

Imagine some of our earliest mammal ancestors, little rodent-like creatures scurrying about in the shadows of the last dinosaurs. The ones that became absorbed in the pleasant sensations of a good meal, warm rocks, and sweet-smelling flowers . . . CRUNCH . . . got eaten because they missed the sound of a slither nearby. The ones that lived to pass on their genes were nervous and jumpy, quick to notice potential threats and to remember painful experiences.