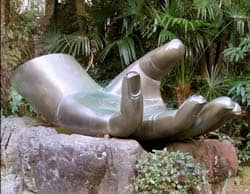 Sometimes it's good to stay with a question, rather than latch onto any one answer. Is Buddhism religion? Well, it is, and it isn't. No creator deity is mentioned here. So can there be religion without God? Theology, without theos? And since the Buddha clearly opposed the priestly caste, one might even make a case for his path being a religion of no religion.

Yet a religious dimension to the Way of the Buddha is quite real and vital. As the teachings were carried beyond the homelands, it formed the first world religion. Under King Ashoka's reign in India, all creeds were welcome to practice side-by-side.

There's nothing to convert to. Being a Jew, Christian, Muslim, pagan, atheist, or unaffiliated doesn't change the Buddha's essential teaching: Four Noble Truths, the nature of human suffering, and liberation from needless suffering.

Union with the divine is best experienced rather than expressed through limited language. Such emphasis on first-hand experience rubs against the grain of abstract theology. So Buddhism can be seen as partaking of that broad deep river known as mysticism, which inherently undercuts any neat attempts at codification. Call it a practical mysticism, if you will. And today more and more people are becoming free-lance mystics.

Indeed, Buddhism can be seen within an open secret of the past two decades, in which it has played no small part: namely, more and more people are finding personal connection to the sacred, lifted up out of and beyond the Sunday pews, made real for themselves in daily life. Sometimes this is called "spirituality" as distinct from "religion." Yet is there a free-floating spirituality without some kind of container? Somehow the matrix of the Buddha's teachings has remained intact for two and half millennia, to which we can thank the vehicle known as religion.

Well, then, since the religious front is not all cut and dry, might other categories be apt? Is it a philosophy? The Greeks had colonies in India since the time of the Buddha, so we can hear his voice resonating in the words of ancient Skeptic, Stoic, and Epicurean philosophers. In our time, his footprints can be traced in phenomenology (basing wisdom on the direct experience of one's immediate lived world), with offshoots in existentialism and deconstruction.

The canon of Buddhist texts (Tripitaka), does provide a robust body of ethics, a cornerstone of classical philosophy. As for logic, Buddhist teacher Nagarjuna can run rings around Aristotle's "either/or" -- a Western template for dualism (subject vs. object, self vs. other). Western philosophy's love of wisdom (philo + Sophia) thus, alas, often goes unrequited. The Buddha never ventured into the mind-body split that is central in Western metaphysics (and theology). His is a physically embodied metaphysics, where body and speech can function as one. And his concern is with practicalities, rather than free-floating metaphysical sophistries.

The Buddhist canon is also rich in teachings known as Abhidhamma, with a deep, systematic psychology. Is Buddhism psychology? The popularizations of psychology and Buddhism have often piggybacked upon one another in the West. Many now enjoy the psychological healing of Buddhist teachings as simple mindfulness and emotional intelligence. But Buddhism is not self-improvement, since it's the very nature of self that is dismantled here, not reinforced. Buddhism holds psychology to its radical origins: a suffering self won't be healed by a better self waiting in the wings, but rather by seeing through the fiction of selfhood. (And what is this self we fear we will lose if we leave behind what was illusion?)

Then, is Buddhism science? Certainly, we invest a great deal of respect in what we call Science. Yet while the West has become adept at breaking down Nature, subdividing the bits, and putting tags on each, the East has grown very good at seeing relationships. Fortunately, new sciences are now arising with an appreciation of the Buddhist nondualist view of the universe as networks of interpenetration.

Article Continued On Next Page
Page: 1 of 2
5/5/2010 4:00:00 AM
About Kevin Juhasz
Kevin Juhasz is a content manager with a Colorado-based marketing company and the owner of <a href="https://www.thewritecontent.net/about">The Write Content</a>, which provides writing and editing services. He has more than 25 years of writing and editing experience with websites, newspapers, magazines, trade publications and more. Kevin has covered news, sports, entertainment, technology and a wide variety of other subjects.