Entanglements and Divination:
Physics and the Magician, Part One 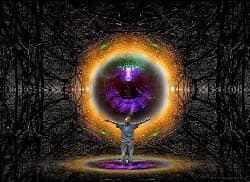 In every Aeon, magicians have borrowed from the paradigms of their native cultures when they felt the need to explain how magic worked. Thus in shamanic times, magicians assumed that they somehow interacted with the animistic essences intrinsic to natural phenomena, plants, animals, and people. This idea finds perhaps its fullest development in the classical Greek doctrine of Platonism where all outward forms that manifest to our senses merely reflect, somewhat imperfectly, certain ideals that reside in some sort of superior realm. Thus all observable cats reflect, to varying degrees of perfection, some sort of cosmic feline principle. To the modern mind this looks rather like an excessive fascination with the ability of the human mind to form abstract concepts. Nevertheless Platonism, and its fuller flowering as Neo-Platonism, had a profound influence on magical and religious thought for two thousand years.

Early Christianity initially incorporated Neo-Platonic ideas wholesale, and its traces remain in the Orthodox ideas of Christ as the Logos and in the sanctity and power of icons. In the Catholic Church, the doctrine of literal transubstantiation and the veneration of relics remains an influence. Despite the philosophical and monotheistic gloss, such ideas hark back to animistic ideas like eating the hearts of brave warriors to acquire their powers.

Alchemy arose as a quest to find the essences of things. It would have seemed quite reasonable to the medieval mind to try to distill the essential principle of Metal out of lead or mercury, or the essential principle of Generation out of menstrual blood. Of course none of this seems to have gotten very far until some alchemists had the humility to observe the actual rather than the imagined and abstract, idealized qualities of various types of base matter.

Animistic style thinking still colors the way all humans think; we all still have to weigh up any phenomenon from the idea of an atom to our ideas of a particular a person in terms of similes and metaphors and analogies, what powers it has, and what else it resembles. In other words we want to know what something ‘is', to give us some kind of a handle on it. For the purposes of manipulating the world by physical means, such animistic thinking does not work very well if you restrict your vocabulary of analogies and archetypes to such abstractions as earth, air, fire, and water. Adding Aether does not help much and adding the sephiroth of the cabbala or the signs of the zodiac just multiplies the lack of lucidity.

To manipulate the material world indirectly you need something far simpler and more basic than the earth, air, fire, and water concepts. You need something so simple that you will often find it very difficult to see it in the seemingly complex real world. You will need an abstraction based on an idea so mind-numbingly trivial that you can easily discount it, (pun intended). You will need mathematics, either intuitively to throw a stone, or formally to hurl a rocket to the moon.

However when it comes to interacting with the world directly (by magic), the animistic style of thinking may have advantages. If we assume that the mind or the complex functions of the brain can somehow, and to some extent, mesh directly with the world to find things out or to influence them, then we have a mapping problem, or what magicians call the problem of the magical link.

How can something inside of our heads have any kind of one-to-one correlation with the phenomena outside? This problem has bothered philosophers since the inception of their profession. We have imperfect senses, but when we enhance them with careful observations or machines the problem just gets worse because we then begin to see an awesome complexity in the simplest of things.

Thus we inevitably must resort to some kind of conscious analogical modeling of the phenomena in our reality because our conscious minds cannot digitize anything but the simplest of our experiences, although our unconscious minds may have a greater ability to do this. The unconscious mind plainly stores vastly more information than it makes available to the conscious mind. When you meet an old friend your subconscious immediately confirms their identity through matching hundreds of their features that you could not consciously describe, let alone sketch from conscious memory.

Animistic style thinking can thus offer a useful kind of data compression. Assuming that one cannot consciously remember enough for a decent magical link then a classification in terms of say an earthy/aquatic nature with jupiterian influences moderated by the sign of Sagittarius might serve as a sigilistic type of shorthand for interacting with the target event by psychic means. However, for this kind of thing to work the operator must maintain a pretty tidy and unequivocal symbol system. Modern people rarely do this; they think too much.