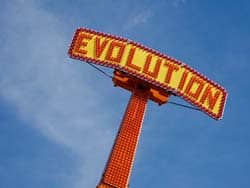 The old gods are dead or dying and people everywhere are searching, asking: What is the new mythology to be, the mythology of this unified earth as of one harmonious being? ~ Joseph Campbell

There is no longer any doubt that the scientific story of evolution is true, at least among those who have a relatively large forebrain. So now we can begin to worship the story, embracing evolution as our new creation myth.

Those beliefs are now dysfunctional. They take the divine away from the earth and place it in some other realm, robbing life of its due reverence. Our major religions have come to regard earth as little more than a training planet, a place where we come to learn a few lessons, or burn off some karma, or get saved by some messiah or another. The general hope is that once we're done on this funky old sphere we can go off to a better place, where we truly belong, and be in another life living happily ever after. We will be going "home."

It would serve us better to bring our spiritual attention back to the earth. If we could feel ourselves as part of the life of this planet, we might take better care of our environment. If we bring our sense of the divine to this earthly existence, we might even find more joy in living, however briefly, here and now.

For now, our understanding of evolution still lies rusting in our neo-cortex. We need ways to revere the story: make ritual around it; give it song and dance; internalize it. We need to mine evolution for its spiritual gold, learning our new role in the grand scheme of things.

In fact, the story of evolution can offer us everything we traditionally seek from religion: a basis for morality, humility, meaning, purpose, a message of self-liberation, and as much awe and wonder as any bible. Let's stop looking upward in prayer and gratitude for this or that, and instead direct our gaze downward at the earth and all around us, to celebrate Nature, the instrument of our creation, and the closest and most obvious source of all our gifts.

When modern ecologists and neo-pagans search for a symbol for wholeness and health, they come back to the ancient goddess, mother earth, mother nature, the Greek's Gaia. Only today she starts as a "hypothesis," and must trickle down from her rebirth as scientific postulate to become sacralized by the people's shamans. ~ Theodore Roszak

The story of evolution tells us that we are part of the history of life on this planet, making our primary identity that of "earthling." (Of course, if we discover life in other galaxies we might have to become galaxy identified, which would make us "Milky Wayans.")

You can feel your earthling nature inside your body, which is composed of "all natural" earth ingredients. Just rub your upper and lower teeth together for a moment and feel the hardness of your bones. They are made out of minerals found in the earth -- calcium, magnesium, sodium, potassium -- all mysteriously molded together into your skeleton. Can you feel that you are a piece of earth walking on earth? It is though we are earth sprouts that somehow gained a lot of mobility.

Meanwhile, about 75 percent of your body is liquid, and most of that liquid has the same chemical consistency as the oceans. You literally sweat and cry seawater. It's as if the ocean splashed up on shore and eventually walked away.

When you think about it, where else could our bodies have come from but the earth and its seas? You are certified organic.

Not only are we made out of earth and ocean, we have been shaped by them. Your legs and feet, fingers and thumbs, this upright posture and big brain, even your instincts, emotions, and thoughts -- all are the result of life adapting to elemental demands. Remember that for a couple billion years of life on this planet there were no legs or feet simply because there was no land to walk around on. Legs were of no use.

As we consider our body, we might reflect on the fact that the most critical steps in its creation can be correlated with major environmental change. Scientists believe that upheavals of land masses nearly six hundred million years ago triggered the "Cambrian Explosion" -- also known as the "Big Birth" (biology's Big Bang) -- which marks the first appearance of many forms of life, including multi-cellular animals with skeleton-like structures. Vertebrates like us.