From Origin to Destiny: Knowing and Believing 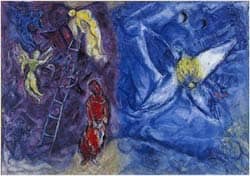 In October of 1999, Forbes magazine released its Big Issue IV: The Great Convergence. Its introduction touted the remarkable indicators that heretofore oppositional positions were quickly reaching a point of union. "In the face of this awesome symmetry, some scientists are even inching their way to a new rapprochement with philosophy and religion." Now more than ten years old, can we say the Forbes prophecy is coming true?

Someone apparently didn't tell Richard Dawkins about it. His Foundation for Reason and Science has a Converts' Corner where enlightened unbelievers can give their "testimonies" of atheism: "You have converted not only me, but my husband, my remaining daughter, her husband and 3 sons . . ." Nor did anyone inform my kids' camp director, who repeatedly taught that creation was a six-day event, that the earth is only several thousand years old, and that dinosaurs lived simultaneously with humans. The "rapprochement" is perhaps farther off than the editors of Forbes might know.

Most historians of science and religion recognize that the "war" between science and religion that was kindled in the late 19th century was a constructed conflict. Intentionally generated by confident scientists and their media and institutional partners, it put at odds two avenues of knowledge that had been both allies and sparring partners for centuries. The acceleration of scientific research and productivity in the 18th and 19th centuries led to both extraordinary achievements and a scientific hubris that has not yet faded, despite the secular disenchantments of the 20th century. But the accomplishments of science and its gloating advocates not only fed the claims of scientism, they provoked equally audacious religious claims. The 19th century Catholic Church responded with the dogmas of papal infallibility and the Immaculate Conception. The polarization of the two realms of human quest has been an "equal arrogance opportunity."

Both quests could use a hearty dose of humility. Not the kind that denies fact in favor of sheepish guesses, but the kind that accepts the close proximity of working hypotheses, empirical verifications, faith, hope, and insatiable curiosity.

Christian thinkers at the end of the 19th century were some of the first to run the gauntlet of scientific infallibility. They recognized that the absolutist stances of both science and religious authority made the genuine questions about human identity more elusive than ever. As philosopher Maurice Blondel reflected, the fundamental question was this:  "Yes or no, does human life make sense, and does man have a destiny?" What are we and where are we going? This is the nexus between science and religion.

While the questions were timeless, the answers offered at the end of the 19th century were new. Darwinism had wrought two vital changes in this question of destiny: First, it had eroded the idea that human destiny has any nonmaterial meaning. Human destiny was tied to an evolutionary process, and no defined end could exist. Humanity was not working toward anything; its random progress, an oxymoron evident in the works of Herbert Spencer, made the idea of purpose or destiny meaningless. A second, ironic, result of Darwinian thought tied human destiny to its own will. No longer did suffering humanity need to look forward to the promises of heaven in order to endure the pains of earthly life. Progress, and its handmaiden, Science, involved making this world better now. Neither the evolutionary process nor material progress could assuage the questions Blondel was asking, questions that lay beneath the angst of his generation and ours.

The progress of knowledge analyses and reduces its object to an abstraction, because reflection destroys instincts and natural inclinations, because it creates new needs faster than it can satisfy them. If the life of the senses leaves us with an infinite lassitude, scientific research leads to a more profound emptiness, to a collapse without remedy. To know is vain, is painful, because the knowledge brings to light an unsatisfied and inexplicable desire, the unknowable and the vanity in human being. Through its very development, science multiplies our contacts with the mystery as an expanding sphere touches at more and more points the void into which it is plunging. What is even a simple fact? Can we place ourselves in the presence of any positive, palpable, complete fact? No, every fact is already a complex fiction, an organic integration, a mental construction . . . . Science leaves an enormous amount unknown in the world; in vain do we seek from it reasons for acting . . . (Action, 38)