The Jewish Secrets of Lemony Snicket 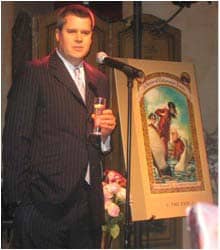 Novelist Daniel Handler, better known by his pseudonym, Lemony Snicket, surfaced recently to talk with Moment editor Nadine Epstein from an undisclosed location about the troubled Dickensian world he crafted in A Series of Unfortunate Events. The series' thirteen books follow the misadventures of three smart, resourceful, but unlucky orphans and have sold over 50 million copies in 41 languages, creating a stir in children's literature second only to J.K. Rowling's Harry Potter series.

From The Bad Beginning, published in 1999, to The End, which came out on Friday the 13th last October, the Baudelaire children -- Violet, Klaus, and baby Sunny -- have been forced to rely on their own prodigious talents to thwart the evil plans of the villainous Count Olaf, who is determined to get his hands on their fortune. Their progress is hampered by a succession of obtuse guardians who can't seem to recognize evil even when it stands before them.

The San Francisco-based Handler transforms himself into the well-mannered narrator of the Baudelaires' search for an elusive organization comprised of the few adults who may (or may not) actually have a clue, and for the truth behind the fire that may (or may not) have killed their parents. Answers don't come easy, even in the final book in the series. In this rare interview, the normally tight-lipped author -- called "the best dark humorist since Kurt Vonnegut" by Salon.com -- reveals tantalizing details for readers looking for Jewish meaning in this world of unfortunate events.

Where did the pen name Lemony Snicket come from?
I was researching my first novel, Basic Eight (the story of a 12th grade girl in San Francisco, her seven close friends, and a world turned upside down by revealed secrets, horrifying self-discoveries, and satanic murder) and I was on the phone with a right-wing religious organization. I wanted them to mail me material that I could use in my research, but didn't want to be permanently on their mailing list. They asked me what my name was and I opened my mouth and said "Lemony Snicket." I thought that's not a name that anyone would necessarily believe. But then the person on the other end of the phone said, "Is that spelled how it sounds?" Which may or may not prove something about right-wing religious organizations.

What inspired you to begin writing A Series of Unfortunate Events?
I thought it would be interesting if terrible things happened to three helpless children over and over again.

Why did you name your family of protagonists the Baudelaires?
Because I am fond of the poet Charles Baudelaire, whose most famous work is The Flowers of Evil, a cycle of poems that discusses dreadful circumstances and finds beauty in them.

Where did you come up with the names -- Violet, Klaus, Sunny, and Olaf?
There are all sorts of antecedents for those names that people have picked up on, but I also thought it would be interesting to devise a setting for the book that is somewhat ambiguous. Violet is a fairly British name; Klaus is a fairly German name; Sunny is a fairly American name, and Olaf is a fairly Scandinavian name, and that creates a certain amount of confusion.

Why can't adults in A Series of Unfortunate Events recognize evil even when it is right under their noses?
For the same reason that adults can't recognize evil in real life: they are either corrupt or dim-witted.

Do children possess wisdom adults have forgotten?
I don't think children really have a higher rate of nobility in A Series of Unfortunate Events and I certainly don't think they have one in real life.

What children's books and authors would you recommend to our readers?
When I was a child my absolute favorite book was The Bears' Famous Invasion of Sicily by Dino Buzzati. I also really liked books by Roald Dahl, Edward Gorey, and Zilpha Keatley Snyder.

Did they influence your writing?
Yes, most certainly. I went back and reread those books before I wrote The Bad Beginning, so I've stolen a lot from [them]. And, in fact, when I was done writing The Bad Beginning and The Reptile Room, and we had early copies of them, I sent them to Edward Gorey with a note saying that I hoped that I would be forgiven for all that I had stolen from his works. Then he died a few weeks later. So I like to think that I killed him. I don't have any proof, of course.