I'd never been to Meron before that night.

Ostensibly, there was no reason to travel there. Meron is a tiny town situated on a mountain in the woods of northern Israel. It barely has a main street, let alone a strip mall or hotel. Perhaps its only claim to fame is that it serves as the final resting place for famous rabbinic figures: Hillel, Shammai, and Shimon bar Yohai (also known as Simeon ben Yohai).

It's also the site of one of the biggest parties in Israel. 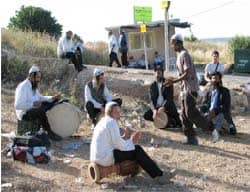 Bar Yohai was a 2nd-century rabbi whose teachings are found in the Mishnah. Traditionally, he was thought to be the author of the Zohar, the seminal kabbalistic work, though modern scholars have questioned this theory. Before he died, Rabbi Shimon bar Yohai requested that on his yahrzeit, which falls on Lag Ba'Omer, his students mark the day by rejoicing instead of weeping.

So every year on Lag Ba'Omer, this small town is overrun by nearly a million people, joining together in celebration.

It is a diverse crowd: male and female, old and young, ultra religious and completely secular. In the area near the top of the mountain, tents pop up everywhere. The hundreds of thousands of visitors build bonfires, sheht animals for feasts, and pray. Benevolent people give away thousands of homemade sandwiches and salads. Anybody is welcome to partake.

Young religious zealots dance to trance music or to the sound of their own drums. Chabad Hasidim are out in force luring tourists into donning tefillin. The entire mountainside is transformed into a promenade where superstars of the Israeli religious music scene participate in impromptu jams with the tourists. The festive meals -- often picnics or barbecues -- are yet another opportunity to break into song, storytelling, prayer, telling jokes, and simply spending time with family or friends.

At first glance, the tiny hilltop town looks like complete mayhem. But Meron also becomes a place where strangers become friends. Perhaps when Shimon bar Yohai envisioned his followers celebrating rather than mourning, he knew that a party this good would come out of it.

I wrote this poem, "Bar Yohai (Ai Yai Yai)," after I attended Lag Ba'Omer in Meron. I'd spent all day climbing up and down the hill, praying, people-watching, passing goats being slaughtered, and children playing every manner of ball game. I'd seen a rabbi, a descendant of Bar Yohai, throwing himself onto the top of the famed scholar's tomb, weeping. I'd seen totally secular Israelis, standing in their too-tight shorts and muscle shirts, whispering psalms in the most fervent, humbled voices.

It was one of the most spiritual events I'd ever experienced. Yet everything about it was also intensely, singularly physical. I barely spoke the language. I didn't understand many of the customs. It was a clash of dozens of cultures, some totally alien to me, and some I couldn't even name. But all of them distinctly and unmistakably Jewish.

It felt like the prophet was pushing us,
not gravity
as we soared past dancing Hasidim and
old ladies giving out cookies and
fortunes and
boxes of yeshiva boys
seeing the sun
for the first time in
weeks

Yes, I know
for those who gathered there at sunset there
were promises of a sin-free life at stake
I didn't want that
I just wanted to say hi

apparently everyone had the same idea
the sweat of eight
hundred thousand sweaty Israeli men
crowded up against me
cramming into my personal space
shirts splayed open like an autopsy
broadcasting more sweat and
Stay away from me, I'm a smell machine
fighting to get closer to the kever
I wanted to tell them
I'm only here for the rabbi

Rabbi Shimon bar Yohai hid out in a cave for 13 years
learning Torah and being antisocial
I don't blame him,
that's how I learned to love G-d
today eight hundred thousand people came there
all trying to speak the same language
everyone tried to talk to each other but
no one was listening
the chaos was its own language

I met strangers all day, hugged them like brothers
we weren't sure to go from there so
we laughed and left

She handed me a baguette full of
vegetables rescued from a king's table
hundreds of years ago
No thanks, I said, I don't know you

Don't be stupid, son, start eating, she said
Thirteen years in a cave is a long time