The Man Behind The Wild Hunt

Pagan magazines have undergone significant changes in the past year. Both PanGaia and Pentacle have morphed into new publications. As traditional print media is crumbling, do you think Pagan magazines can survive?

Yes, I think Pagan magazines can and will survive, but I also think they'll never hold the positions of prominence they once did, and that's okay. New media is just inherently better at certain things, like sharing news, social networking, and grass roots organizing. The people who once picked up a magazine for those things, if they have a reliable internet connection, don't really need to any more (except, perhaps, out of brand loyalty). I think we'll see, or perhaps I just hope we'll see, more limited-edition art objects, thicker and more in-depth journals, and magazines focusing on content that the internet can't easily reproduce.

You use a lot of different types of social media to give people access to The Wild Hunt and the social media landscape is constantly shifting. Livejournal has been around awhile but Twitter is relatively new. Facebook has undergone several major overhauls in the past few years. Is there anything happening with social media right now that you find exciting?

I think the ideas behind the Diaspora project are exciting, and point to a social networking future that is open, private, and in your control. The possibilities of such a system for modern Pagans are endless.

I've had friends who were techno-mages and I recall visiting online shrines to Pagan deities. Some Pagan groups conduct ritual and teaching through webcams and forums. I listened in on PantheaCon panel discussions via podcast. Many Pagan leaders offer divination through Skype. Crowley, Gardner, and Dion Fortune never did it that way. Has technology become just another spiritual tool? Like ritual knives and prayer beads?

I think Crowley and Gardner (though possibly not Fortune) would have loved the internet! As for modern technology being a "spiritual tool," why not? Humans have always imbued their tools with religious and spiritual meaning. Why should a laptop, or a DJ setup, be any different from a sword?

A lot of "homemade" Pagan sites died when GeoCities closed down. Some mourned the loss of a Pagan internet era, others rejoiced at the death of the animated Pagan .gif. Do you think the loss of Pagan digital milestones and data are things we should be concerned about as time goes by? Should there be a Pagan digital media library project?

There's always the Internet Archive for those who really miss the GeoCities experience, and there already are digital media library projects that are trying to preserve Pagan and occult texts online (www.sacred-texts.com, for example). I do think it would be interesting to see a real, scholarly attempt to create a robust record of the Pagan internet experience, but it would have to be massive at this point to really be exhaustive to any degree.

You work hard to network and co-ordinate diverse Pagan media outlets. What do you think Pagan media should be focusing on as a whole? How do you envision the future of Pagan media?

We need a newswire(s); we need "hard" news for our community that is produced by our community. Secular news agencies aren't going to care about our communities the way we do, nor should we expect them to. I think that should be the next big step in Pagan new media, and one that I'm deeply invested in. The future of Pagan media in the next twenty years will be Pagan new media going "pro" in various ways (a process that is already underway), solidifying into a new ecosystem of information and interaction with a variety of larger "hubs" providing context, content, and coordination.

When it comes to Paganism and media technology you've become the default "go-to" guy. How do you feel about being in that role?

In all honesty, it's an honor and a privilege that people want to hear my views on anything. If I truly am the "go-to" guy for this stuff, I can only hope to be a good ambassador to the wider community regarding the potential of these technologies. 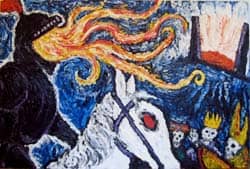 In researching for this interview I discovered that you're also a painter. I've read that you are a fan of Klimt, but your style seems more like Van Gogh, if Van Gogh was painting the Arcanas of the tarot. Do you plan to turn your paintings into a tarot deck one day?

I paint far too slowly for that! I also think my rather large painterly work would look pretty cruddy squished down that small, as the texture is a big part of its appeal, at least for me. As for Klimt, I sometimes feel he's my Holy Guardian Angel, helping me achieve my artistic True Will.