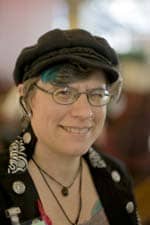 When it comes to Celtic Reconstructionism, ogam, military Pagans, and the poetic arts of ancient Ireland, Erynn Rowan Laurie reminds me I have a lot to learn. Author and contributor to several books and blogs on Celtic and Pagan spirituality, Erynn was named the "Shining Star" of Polytheist Reconstructionists in Jason Pitzl-Waters' article on the most influential Pagans in PanGaia magazine. She is active in the Seattle Celtic Reconstructionist community and has been a speaker at the PantheaCon Pagan conference in San Jose.

This is Part One of an interview Erynn gave Patheos. Here she discusses her own journey and the development of Celtic Reconstructionism.

My first burning question is about PantheaCon: Did you ever find your hat?

Sadly, no. I'm still a little bummed over the whole thing. Thirty years is a long time to have anything of that nature, but so it goes. I've replaced the old fisherman's cap with a really spiffy trilby. The guy at the hat shop handed me a frequent customer card -- buy ten, get one free. I told him my last hat had lasted me for thirty years. He laughed and said, "Then I'll see you in thirty years!" I actually have several hats that I like, but that fisherman's cap was tough and it served me very well, whether I was out backpacking or running around in the Seattle rain. I'll probably get another one at some point because they're so functional, and black goes with pretty much everything.

You're a pioneer of the Celtic Reconstructionist (CR) movement, but that wasn't always your path. I understand you're also an Alexandrian initiate. How did you find your way to Paganism initially?

I was interested in tarot and astrology as a kid, psychic phenomena and the like. When I was 12 or 13 I read a story in the local paper about some witches and thought that made a lot more sense than the Christianity I was raised in, but it wasn't until I was about 23, back in 1984, that I actually met folks who were practicing, read some decent books on the topic, and started getting involved in the Pagan community in the Pacific Northwest. I talk about the whole thing in a little more depth in my essay in Out of the Broom Closet: 50 True Stories of Witches Who Found and Embraced the Craft, edited by Arin Murphy-Hiscock, who asked me if I would contribute to the anthology. There are a couple of inaccuracies that I wasn't able to correct before it went to print, but the essential story is all true.

My Alexandrian initiation came about after I moved to Seattle, through Greenleaf Coven, which has lineage from both Alex and Maxine Sanders, though I'm not a practicing Wiccan anymore. I was elevated to second degree but never wanted to run an Alexandrian coven, so I didn't go on to get a third. I enjoyed the community and the friendships I found through that group, but British Trad Wicca never really moved me in the same way the Irish deities have. I found that the cosmology didn't appeal to me that much after I began looking into other options. Like most people, I got involved with the groups that were available to me at the time I was looking. Before my Alexandrian initiation, I was the priestess of an eclectic Pagan coven down in the Willamette Valley; we were really into percussion and trance dance.

My spiritual life has been a meandering path and I've explored a lot of things over the years. These days I'm very interested in Shinto and am a member of the local Shinto shrine, one of the few outside of Japan. We're very lucky to have such a resource so near by, and it's been fascinating exploring it and experiencing the ceremonies. I've never had a problem with practicing more than one spiritual path at the same time; I don't feel that they contradict one another in any significant ways. I do feel that such exploration informs my thought on other aspects of my spiritual life and helps broaden my understanding of how other people and other cultures approach the world and the sacredness of life. I don't think that being a part of a Reconstructionist spirituality means that I have to give up my interests or connections in other traditions. With the BBC reporting about taiko drummers at a Beltaine celebration in Scotland, I don't think I have much to worry about.

You describe yourself as an animist and I know many people who follow Reconstructionist paths describe themselves as hard polytheists. Some Wiccan groups are focusing more on praxis to encompass different theological beliefs. How important do you think theological stance is to practicing CR?

To be honest, I think it's considerably more important to have a practice of some kind than to worry about the exact theological details of what we believe. Animism works for me, as does a semi-squishy polytheism, and I approach my spiritual life informed by both of these philosophies. I do think that theological discussion is important, particularly as it arises from our experiences and informs our daily lives. Yet when I'm at a Samhain vigil with a dozen people, I'm not going to vet them on the way in the door to ask if they believe the same things I do; ultimately we're all there to honor our ancestors and celebrate together. Whether they're hard polytheists or monists or atheists doesn't matter at that point. We're all there for the ritual.