Science and the Demands of Virtue 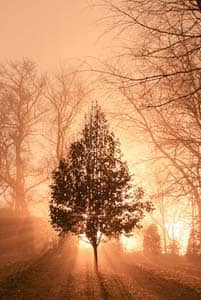 Take for example, the scandal surrounding the conduct of researchers at the Climatic Research Unit (CRU) at East Anglia University in the UK. Whether or not the recently revealed emails and computer programs undermine the theory of anthropological global warning (AGW), it is clear that current public policy debate is based at least in part on the research of scientists of questionable virtue who sacrificed not only honesty and fair play but potentially the well being of us all in the service of their own political agenda.

All of this came to mind recently when a friend sent me a talk on the environment ("Through Creation to the Creator") by the Orthodox theologian Metropolitan Kallistos Ware. Ware argues that all creation is "a symbol pointing beyond itself, a sacrament that embodies some deep secret at the heart of the universe." Unlike the Gnosticism that holds sway in many areas of life (including scientific research), the Christian Church argues that the secret of creation is both knowable and known. Creation, Ware says, points beyond itself to "the Second Person of the Trinity, the Wisdom and Providence of God" Who is Himself both "the source and end" of all created being. Insofar as the Christian tradition has an environmental teaching at all, it is this: Jesus Christ is the "all-embracing and unifying" Principal of creation.

At its best natural science research is a means of exploring and deepening our appreciation and gratitude to God for "the variety and particularity of creation -- what St. Paul calls the ‘glory' of each thing (1 Cor. 15:41)." But appreciation and gratitude are not the fruit of technical competence but an ascetical effort. We must learn to "love the world for itself." According to Ware, we do this not simply for what the natural world can do for us but "in terms of its own consistency and integrity." And again, at its best scientific research has a positive role to play here. This is what makes Climategate so tragic; once again science is being twisted to serve selfish ends.

C.S. Lewis reminds us of the danger here when he observes that, "Each new power won by man is a power over man as well." While our scientific advances have made us stronger in some ways, they have made us weaker in others. While not without copious benefits, science represents a real and substantial risk for both our relationship to creation and to ourselves. Giving in, Lewis points out, means that we no longer seek to "conform the soul to reality" through "knowledge, self-discipline and virtue." As with magic in an earlier age, modern science tempts us to "subdue reality to the wishes of men."

To further their own agenda the CRU scientists imagined that they could manipulate not only the data but the peer review process as well. While both are unacceptable, the latter represents an assault on the human community. To borrow again from Lewis, it is an attempt by some to assert their will over others.

Metropolitan Kallistos reminds us that the "ascent through the creation to the Creator is [not] easily accomplished, in a casual and automatic way." It requires not only the theological virtues of faith, hope, and love, but more ordinary moral and intellectual virtues such as "persistence, courage, imagination." While the cultivation of these and the other virtues will not guarantee success in research (or public policy for that matter), their absence will guarantee failure.

Likewise, a sacramental vision of creation will guarantee neither sound science nor virtuous scientists. But given the major social and political changes being proposed in the name of the environment, it seems to me that we would do well to reflect more deeply on not only the practical implications of public policy but our own motivations and the means we are willing to employ to reach our goals. As Climategate demonstrates, if only on a relatively small scale, we can perpetrate great injustice with even the noblest motives.

This article was first published by the Acton Institute and is reprinted with permission.

Father Gregory Jensen is a psychologist of religion and a priest of the Diocese of Chicago and the Midwest (Orthodox Church in America). He blogs at Koinonia.