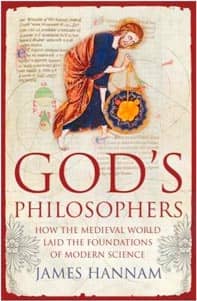 Until very recently, almost everyone believed scientific progress has been held back by religion.  But today's historians have realized that, if anything, the popular perception is the opposite of the truth.  It seems that Christianity has probably had a net beneficial effect on the rise of science.  And surprisingly, recent research has revealed that almost everything that people think they know about the history of science and religion--the mythology of its many conflicts--is untrue or, at the very least, highly misleading.

The most egregious example is the idea that the Church in the Middle Ages taught that the earth is flat.  This is simply false.  In fact, medieval textbooks, sermons, and illustrations repeatedly make the point that the earth is round.  The orb presented to medieval kings as a symbol of their power represented the earth, as everyone was aware that our planet is spherical.  Even in the midst of the so-called ‘dark ages,' St. Isidore of Seville and St. Bede of Jarrow knew perfectly well that the earth is not flat.

Of course, this means that Columbus did not actually prove the sphericity of the earth when he discovered America.  In fact, Columbus's search for a route to Asia only makes sense on the supposition that the earth is spherical.  At issue in the 1490s was not the shape but the circumference of the earth.  His sailors were not worried about sailing "off the edge" of the world; they were concerned about starving in the vastness of the uncharted ocean.

The myth that people in the Middle Ages thought the earth is flat appears to date from the 17th century as part of the campaign by Protestants against Catholic teaching.  But it gained currency in the 19th century, thanks to inaccurate histories such as John William Draper's History of the Conflict Between Religion and Science (1874) and Andrew Dickson White's History of the Warfare of Science with Theology in Christendom (1896).  Atheists and agnostics championed the conflict thesis for their own purposes, but historical research gradually demonstrated that Draper and White had propagated more fantasy than fact in their efforts to prove that science and religion are locked in eternal conflict.

For example, White and Draper claimed that the Church attempted to ban human dissection.  This practice has been essential to understanding the human body and training doctors.  But almost all societies have forbidden it; it was not allowed in ancient Greece or Rome, nor under Islamic rule.  Dissecting corpses first started in 13th-century Italy and quickly became established in the medical schools there.  As historian Edward Grant has noted, the remarkable fact is that this happened with barely a whimper of objection from the Church, even though taboos against cutting up corpses are almost universal among human societies.

There was a papal prohibition against boiling bodies to render the flesh from the bones.  This was aimed at crusaders who wanted their bones buried at home without having to worry about their flesh rotting en route.  For some reason, anatomists were concerned that this rule applied to them too.  So, as one of them notes, they decided not to boil the heads of their subjects to examine the ear bones.  But it is clear that this accidental obstacle to science was only a temporary setback.  By the 16th century, Andreas Vesalius was openly discussing boiling bodies in his book On the Fabric of the Human Body.  White and Draper tried to make out that Vesalius had had a run-in with the Spanish Inquisition over his scientific investigations, but again this turns out to be false.

Many other such stories are casually repeated today.  We are told that the Church, in the 18th century, led campaigns against vaccination for smallpox on the grounds that vaccines interfered with divine providence.  Then, in the 19th century, the Church was supposed to have objected to anaesthetics, especially for women in labor since the pangs of childbirth were supposed to be a punishment for original sin.  Yet none of this happened.  Objections were raised to vaccination and anaesthetics for good medical reasons, and in rare cases where clergymen were involved they made no attempt to invoke divine law.

Some of the myths of conflict would be comical if they had not been taken literally for so long.  Carl Sagan repeated the claim that Pope Callistus III excommunicated Halley's Comet in 1456.  His Holiness would have been daft if he had done this, but it turns out that the tale derives from a misreading of a contemporary chronicle.  The Church is also regularly accused of trying to ban, of all things, the number zero!  The origin of this strange idea remains obscure, but needless to say there is no evidence for it dating from the Middle Ages.  And there is no medieval record of medieval theologians wasting their time pondering how many angels can dance on the head of a pin.  That calumny is first found in late 17th-century Protestant propaganda.