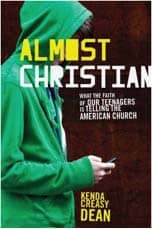 From 2003-2005, researchers conducted the most ambitious study of adolescent spirituality to date in the U.S. Among the results of the National Study of Youth and Religion (NSYR), it was found that while three out of four American teenagers claim to be Christian, only half consider it very important, and fewer than half actually practice their faith as a regular part of their lives. Additionally, the study found the vast majority of teenagers to be "incredibly inarticulate about their faith and its meaning for their lives," with mainline Protestant teenagers ranking among the least religiously articulate of all.

Kenda Creasy Dean, Professor of Youth, Church, and Culture at Princeton Theological Seminary and a longtime youth minister in the United Methodist Church, was one of the study's interviewers and spent a summer talking to teenagers about their faith lives and views on religion. Her experience was the impetus for her compelling new book, Almost Christian: What the Faith of Our Teenagers Is Telling the American Church, an investigation into -- and an impassioned response to -- the results of the NSYR study, results that she and many others in the church found quite disturbing.

Dean uses the study's findings to deliver a challenging wake-up call to the mainline church, which she believes is passing off a mutant form of Christianity to its young people. We spoke with Dean recently about the study's findings on teen faith, the "watered-down version of Christianity" prevalent in mainline churches, why and how the church must rediscover its sense of mission and faith language, and ultimately where hope lies for the future of the mainline church and young people longing for a faith worth living -- and dying -- for.

How did you get involved in this project, and why are its findings are so significant?

My buy-in to the project was that it was the largest study of American teenagers and religion to date, involving extensive interviews of more than 3,300 American teenagers between the ages of 13 and 17 (including telephone surveys of these teenagers' parents), followed by face-to-face follow-up interviews with 267 of these teenagers. There is also an important longitudinal component to the project that revisits more than 2,500 of the teens as they enter adulthood. And the project was conducted by very credible people, so that was in its favor as well. I figured it was something I was going to have to be dealing with for the next twenty years of my life anyway, so I might as well get in on the ground floor with it.

So, you spent many hours over the course of a summer interviewing teens, which you call "one of the most depressing summers of your life." Why do you say that?

Well, I had just finished a book about passion and now, as I was interviewing these kids for this study, I found it quite worrisome that kids again and again -- kids who were raised in the church -- fell into what we call a "moralistic therapeutic deist" category. They went to church a lot, but weren't really affected by it. That was the thing that was really shocking to me.

You refer to this "moralistic therapeutic deism" quite a bit in your book. Can you unpack this term for us?

That's the name the NSYR came up with to describe the "belief system" of the majority of teens surveyed. The shorthand of moralistic therapeutic deism is that religion helps you feel good and do good, but God pretty much stays out of the way. Now, you can call on God if you need God to solve a problem, but God's track record on solving problems is pretty bad. So the primary God-images that the kids had were either as the "cosmic therapist" or the "divine butler." The therapist serves as the one who helps you feel good about yourself; the guidance counselor image comes to mind here when working with teenagers. The divine butler is somebody who comes when called upon but otherwise stays away. Those images were identified in the study as being dominant among teenagers. And that was very true with the teens I talked to as well. They believe that: