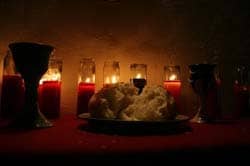 At times I find myself at spiritual odds. The poetry of my worship life is rooted in the Anglican/Lutheran tradition but I am a scholar and theologian of the Progressive Christian Alliance. Luckily the ProgCA, like the Metropolitan Community Church, contains a lot of worship and liturgical diversity in it -- from the Anglican style worship to more Pentecostal styles -- all while maintaining a Big Tent approach to progressive Christianity. While the poetry of the mainline Anglican and Lutheran traditions feed my soul, I find the hierarchal rootedness of those traditions soul draining.

For instance, I attend Christ Church Cathedral in Vancouver, BC. While in the Anglican Communion the Diocese of New Westminster is sometimes known as ‘Satan's Diocese' for its blessing of same-sex unions, on most other matters we tend to be fairly conservative, in the Anglican sense. By this I mean there is a lot of emphasis on chain of command, the prayer book, and the functions of ministry. To assist in worship -- to hold the chalice during worship -- you must have a license from the bishop. This essentially becomes a sort of low-key doctrine test to determine who is ‘in' and who is ‘out' in participating in the telling of God's story. As one friend put it, our diocese is a cult of the clergy, and it's one that tends to forget about the laity.

Clergy can perform baptism, Eucharist, and weddings. In the discernment process to become a priest, when candidates are asked why they want to be a priest, the only proper answer is because they want to serve the Eucharist. Lay people, if so inclined, can perform agape meals, historically closer to the meals Jesus and his followers -- and the early church -- performed but the ritual function Eucharist is kept far away from the average butt in the pew.

Personally, the most powerful instances of Eucharist I have encountered have been outside the church, performed in ways that many accept theologically, if not structurally. Two instances come to mind. The first was volunteering at a street ministry on the Downtown Eastside of Vancouver, BC. The DTES is the poorest postal code in Canada, replete with drug and prostitution issues. One Tuesday night during a movie night, while the guys from the street watched a film, a small group of volunteers made sandwiches in the church kitchen. The second Eucharistic experience was sharing a coffee with a stressed student during my time running a campus ministry at Simon Fraser University. I have never before or since had such a powerful experience of God in Christ being made present in the elements.

What we need now are alternative sacraments, just as we have subversive theologies -- theologies of liberation, queer and feminist theologies that push back against the sexism and heterosexist posturing of our official doctrines and dogmas. Many of these theologies do put a new spin on our sacramental practices, and rightfully so. Elite classes of priests and ministers with a unique control to the holy can and will use said positions to solidify power. To push back is to reclaim the vitality of the priesthood of the believer and the holiness of those Jesus called the ‘least of these'.

Sacrament of the Ordinary

Traditionally constructed, the sacraments are seen as the outward sign of God's inward grace. Various Christian traditions understand these in different ways, and even the number of sacraments varies from tradition to tradition. Eucharist can be, for example, the literal body and blood of Jesus, a memorial, or a symbolic meal. The Lutheran church tends to try and hold multiple positions together and just says that the spirit of Christ is ‘with, in and under' the elements. Or, somehow something happens with these elements and we name it as Christ.

In this way, it is not important if bread and wine are symbols, literal body and blood, or a memorial meal. What is important is the story we tell with it. For example, more conservative traditions will sometimes only give the Eucharist to members of their church so as to ensure that only people who ‘believe the right way' are allowed to receive the sign of God's grace. Other traditions, like the Metropolitan Community Church, have as a policy the inclusion of all at the Eucharistic table. This is understandable as they are a church tradition made up of LGBT folks, many of whom have heard their whole lives that they are excluded from God's grace, love, and forgiveness. In both cases a particular story of faith and life with God is being told.