A Baptismal Life: The Sacraments of Initiation 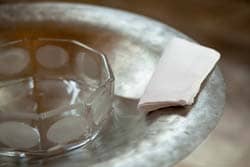 The catechumenal journey is concluded with the celebration of the sacraments of initiation -- baptism, confirmation, and Eucharist. The journey of faith is brought to sacramental fullness; marginal existence within the Christian body is exchanged for full membership. But even this climactic celebration is not the end. Rather, in order that the neophytes (that is, the newly baptized) "may become more perfectly like your Son," the ritual process of Christian initiation is the beginning of a journey that concludes only with the vision of God. In other words, one is initiated into a way of life, a living out of the implications of baptism. Such a journey is not concluded until each Christian meets the Lord: "When the Lord comes, may you go out to meet him with all the saints in the heavenly kingdom" (RCIA 226; R 102).

Baptism is complete neither with the conclusion of the catechumenal journey nor with the celebration of God's mighty acts in the initiation sacraments. Admittedly, the liturgical celebration is complete once the candidate has been baptized and confirmed and has participated in the Eucharist. But subsequent life is lived in the power of baptism. Baptism's meaning can be unfolded only over the course of life, especially the profound Pauline insight that in baptism we die with Christ and are given a pledge of resurrection. A complementary thesis is that the ordinary spirituality of the Christian is a baptismal spirituality. Baptism is the foundation of Christian life and ministry. James White, in commenting on Luther's statement that "there is no greater comfort on earth than baptism," suggests that for Luther, as well as others, it is necessary to perceive "Christian life as a baptismal spirituality, i.e., as a lifelong living out of one's baptism."

In the Early Church

The ritual activities referred to by the term sacraments of initiation are the third stage of Christian initiation (the first two stages being, respectively, entrance into the order of catechumens and election or enrollment of names). They consist of the celebration of baptism, confirmation, and first Eucharist at the Easter vigil. Thus we have the name paschal sacraments. This stage marks the end of the candidates' marginal existence within the church. With these concluding rites the neophyte is fully incorporated into the body of Christ through water and Spirit as well as through the offering and receiving of the body and blood of Christ.

In the beginning baptism, Eucharist, and the Easter vigil developed separately. Baptism, either from its origin or very soon thereafter, included accompanying rites. One of these would later be treated as the separate sacrament of confirmation. The early postpaschal community recognized that baptism -- on the model of John's baptism but with its meaning centered on Christ -- was the means whereby one entered the Christian community. The Eucharist, founded on the meals of the disciples with Jesus, particularly the Last Supper and the postpaschal meals, early on was celebrated on Sunday. This day was the normal time for commemorating the resurrection of the Lord, a commemoration that did not exclude the passion and death of Jesus. Since the Eucharist is the community celebration par excellence centering on the paschal mystery of Christ, it is not surprising that such a rite would be the normal means for making Sunday the "Lord's day of the Lord." The Easter vigil, at least insofar as it would influence future developments, does not seem to have come into existence until after the middle of the 2nd century. Although Jewish Christians would most likely have continued to celebrate Jewish Passover once a year, such a practice would not have been obligatory for gentile Christians. Furthermore, each Sunday was a commemoration of Christian "passover," that is, the paschal mystery of Jesus Christ.

Despite their separate development, baptism came to be celebrated at the Easter vigil during the second half of the 2nd century. The Eucharist of the vigil concluded the rites of baptism. This development should come as no surprise. Baptism, Eucharist, and Easter vigil celebrate the very same reality: the passover of Jesus from death to life, the model and means for the passover of the community (Eucharist) and of the individual who is welcomed into the community (the rites of baptism). There was not, as of yet, any commemoration of Holy Thursday or Good Friday, the vigil being a unitive festival of the paschal mystery. Also, there was no Lent. These would come later. Christians fasted for several days before the Saturday vigil. They kept watch through the night, listening to the word of God and celebrating the entrance of new members into their midst. The vigil was concluded at dawn with the celebration of the Easter Eucharist -- the Easter Eucharist, since the vigil Eucharist and the Easter Sunday Eucharist were one and the same. The Easter vigil inaugurated the Easter season (or, as it was also termed in the early church, the period of Pentecost), a fifty-day period during which the neophytes learned to live as ordinary Christians, being instructed in the mysteries that they had participated in at the Easter vigil and being guided in the manner in which they should continue to live out their baptism.