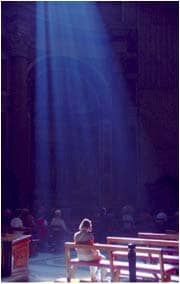 Pope Benedict's remarks to the Curia at the end of 2008 deploring the tendency of social gender theories to promote "emancipation of man from creation and the creator" drew predictable scorn from secular liberals and disappointment from Catholics who would like to see the Roman church remade in a 21st-century image. (Benedict did not, actually, say that homosexuality was as great a threat to humanity as global warming, but that tabloidification of his message is what appears to have stuck.)

The reassertion of Catholic fundamentalism may indeed have unfortunate results -- for example, harming AIDS prevention efforts across the world; but, the pope might reasonably respond, it is not his job to make utilitarian calculations of that kind: outcomes are God's business.

Yet the pope needs to be seen not just as an influential (albeit minor) theologian but as the leader of an institution with more than a billion mortal members. That is a worldly role that Catholic pontiffs have generally taken seriously; and, right now, conservatism may be tactically astute in holding the institution together.

Consider, for example, Spain and Ireland, which over the last two decades have rapidly become much more secular and liberal societies. I personally prefer them that way, but the pope? He is more likely to reason that the Vatican's declining influence cannot be bolstered by just going with the secular flow in respect of sexual mores -- that an ‘if you can't beat them, join them' approach risks sidelining the church altogether.

It should, besides, be remembered that 21st-century Christendom is by no means predominantly white and Western. The pope's message will likely be welcomed by most of his cheerfully homophobic African flock. It may also inspire a fight-back among the faithful in Brazil where, in May 2008, a gay rights parade (in Sao Paolo) attracted more people than had turned out to welcome the pope during his last visit to the country. Better to fight, surely, than to see Latin America go the way of the Ireland.

Moreover, at a time when the dream of self-fulfillment through prosperity is in global recession, depression, and slump, many people may well be looking for strong moral frameworks with clear rules to replace the elective, existentialist, do-it-yourself morality of market-driven modernity. It is entirely possible that the 21st century will see widespread religious revivalism, among all faiths, in a kind of reaction to the discontents and failures of secular globalization. Stand by for more fire, brimstone, and human folly.

In this context a Hollywood treatment of Catholicism is, if nothing else, timely; and Doubt is quite a thoughtful movie, intelligent enough to be ambiguous, although not exactly cinematic. (But it was originally a stage play so we shall forgive it that failing.)

It is set in 1964 at a Catholic school (in the Bronx), which, in a sign of changing times, has just taken in its first ‘negro' pupil. The action centers on the conflict between an old-school, disciplinarian principal, Sister Aloysius (Meryl Streep), and a new-school, liberal parish priest, Father Flynn (Philip Seymour Hoffman.) Interestingly, the namby-pamby liberal turns out to be a pedophile, so on one viewing this is a vindication of Sister Aloysius' conservative and brusquely authoritarian approach to moral guardianship. (If you get too soft on sin it starts bubbling up all over the place). More interesting -- sorry, Pope Benedict -- is the gender dimension: for in her campaign to entrap the bad Father, the good Sister is perfectly aware that she is taking on not just one man's sexuality but a patriarchal male power structure. Equally interesting, and eminently convincing, is the resolution of the problem, when higher authorities promote Father Flynn away from the source of his temptation, without deigning to sack or expose him, so as to leave unsullied the good standing of the mother church. The church's institutional interests must prevail over those of individual members of the flock, and God will do the judging later.

There is a slight anachronistic tension in the plot: for it is a young novice, Sister James (Amy Adams), who first raises doubts about the nature of the priest's fondness for his pupils. She is dramatically necessary as a kind of ‘jury' to hear the prosecution and defense arguments of big Sister and Father; but one wonders whether a 1960s trainee nun would have been worldly enough to harbor such suspicions in the first place. (Maybe she would; it rather depends on her ‘back-story,' which we don't get to hear, making her a rather flat and uninteresting character.)