Destruction: Why Fundamentalists Seem to Enjoy Blowing Things Up

The following is reprinted with permission from ReligionDispatches. You can sign up for their free daily newsletter here. 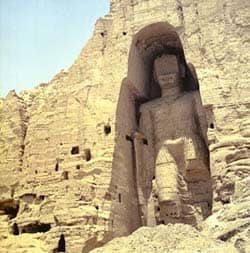 Digby passes on an intriguing observation from Amanda Marcotte, connecting the destruction of the Bamiyan Buddhas with "Drill, Baby, Drill!" Amanda thinks some people like destroying things that remind them of their creatureliness, essentially. (She doesn't take the metaphor of smallness in, ahem, other directions, but she could with some justification.)

It's not a bad idea, but I think there's a better explanation, one that takes into account the religious character of fundamentalists. One of the signature characteristics of fundamentalism, whether Christian or Islamic, is its investment in the supposedly unchanging God who gives dependable bulwarks against the chaos of human existence. The fundamentalists would also have you believe that God is not only unchanging, but also in the long run triumphant. Because the fundamentals are The Truth, they are destined to win out over and against sin, error, and women dressed up all sexy-time and stuff.

That framework inevitably supports the powers-that-be. In his book The Prophetic Imagination, Walter Brueggemann draws a connection between what he calls "the religion of static triumphalism" and "the politics of oppression and exploitation." He gives Exodus an analysis of power:

Karl Marx had discerned the connection [mentioned above] when he observed that the criticism of religion is the ultimate criticism and must lead to the criticism of law, economics and politics. The gods of Egypt are the immovable lords of order. They call for, sanction, and legitimate a society of order, which is precisely what Egypt had. In Egypt, as Frankfort has shown, there were no revolutions, no breaks for freedom. There only the necessary political and economic arrangements to provide order, "naturally," the order of Pharaoh. Thus the religion of static gods is not and could never be disinterested, but inevitably it served the people in charge, presiding over the order and benefitting from the order. And the functioning of that society testified to the rightness of the religion because kings did prosper and bricks did get made.

This suggests to me that the connection between dynamited Buddhas and drilled nature preserves isn't so much the threat posed to fundamentalist egos as the one posed to their notion of a stable, ordered universe. If pre-Islamic religious statues or undefiled ocean floors are allowed to persist, people might get the idea that the world is not subject to the social order. Hence the priority of "those in charge" might not be God-given, and that cannot possibly be the case. Better then to blow those unnatural aberrations to kingdom come and get back to the safe, tidy structures of unchanging eternity.

Neither digby nor Amanda have much use for theology, which is fine. But I do. Brueggemann's understanding of Exodus' response to the "religion of static triumphalism" is not only brilliant, but I believe it is the best possible:

It is the marvel of prophetic faith that both imperial religion and imperial politics could be broken. Religiously, the gods were declared no-gods. Politically, the oppressiveness of the brickyard was shown to be ineffective and not necessary to human community. Moses introduced not just the new free God and not just a message of social liberation. Rather, his work came precisely at the engagement of the religion of God's freedom with the politics of human justice. Derivative from Marx, we can learn from these traditions that finally we will not have a politics of justice and compassion unless we have a religion of God's freedom. We are indeed made in the image of some God. And perhaps we have no more important theological investigation than to discern in whose image we have been made.