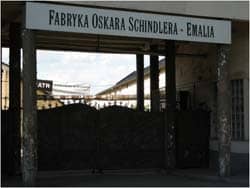 In January 1994, an American tourist stepped out of a taxi into a cold, drizzling rain and entered the Jarden Jewish Bookshop at the far end of the square in the Jewish quarter of Krakow.

On the counter he splayed a weeks-old copy of The New York Times before bookshop owner Les Zdzislaw.

"The man was pointing to photos of sites that were in Schindler's List and demanded to know where they were," Zdzislaw recalls. "But what he didn't understand is that the movie had not yet premiered in Europe. We ourselves didn't know where many of these locations were."

The debut of Spielberg's film in December 1993 sparked a stunning flood of tourists to Krakow that still continues. Many come on a pilgrimage to pay homage to Oskar Schindler, the war informant-turned-Nazi who daringly saved more than 1,000 Jews. Seventeen years after the film brought fame to the factory, the facility will open as a museum on June 11.

The Historical Museum of the City of Krakow has transformed the site into what it calls a "memory factory," the city's first permanent exhibit of Nazi-occupied Krakow. "The world already knows about Schindler," says Marta Smietana, a museum spokeswoman. "Now we can show what all of Krakow was like when the Jews were working for him." The $4.3 million renovation took three years to complete.

"Krakow Under Nazi Occupation: 1939-1945" will showcase life during the war for Poles and Jews, concentrating at least some of its narrative on the disruption of Polish-Jewish relations against the backdrop of Nazi brutality.

The project wasn't without controversy; some were displeased that Schindler had to share the spotlight with the war-era city.

"Since the renovation, the factory seems to have lost some of its character," Zdzislaw said. "I think having it devoted to the German occupation doesn't do Schindler and others like him justice. They are two separate things."

Others argued that Schindler was one among many heroes of the Holocaust in Poland, and a museum devoted solely to a man made famous by a Hollywood movie would distort history.

"If you focus on one person, what about all the other heroes?" asked Jonathan Ornstein, director of the Jewish community center in Krakow. "When you talk about people who saved Jews on Polish soil, he's not the only one. Take, for example, the Polish teachers and orphanage workers who saved 2,000 Jews. There are many, but the world just doesn't know about them."

The Emalia Factory, where Schindler manufactured tinware, sits on a broad stretch of a bending road among many plants and workshops in the industrial zone of Krakow. As one of the largest, it has a commanding presence. After the war, the liberating Soviet forces nationalized the factory and turned it into a telecommunications equipment manufacturer. But eventually the facility was abandoned and fell into receivership, which is when the city bought it in 2005.

Tourists for nearly two decades have been wandering out to Lipowa Street to see the factory. Tourist trolleys would trundle through the heavily commercial zone just to draw up to the unmarked gates and then turn back, sightseers standing on tiptoes and madly clicking their cameras.

At the new museum, modern exhibits intended to take visitors back in time include life-size photo murals, voiceovers, digital displays, and multimedia touch screens. The museum also will feature a Hall of Choices, a sculptural installation highlighting ethical dilemmas faced by citizens during the war.

Some visitors may be shocked by the black-on-white, swastika-like floor tiles in one of the rooms. The company that produced the tiles refused to do so without first receiving assurance from the government that it would not be committing a crime if it went through with the order, since Nazi symbols are banned in Poland.

"We used the swastika symbol because it says so much about the occupation," Smietana said. "At first you think how banal it is, then you start to understand how dangerous it is."

The exhibit is meant to provoke, as in the case of the floor tiles, but to many the "memory factory" will be about the memory of Schindler.

"A couple of months ago, an Israeli woman came to me and wanted to know if it was true that it was her grandfather who sold the factory to Schindler," said Zuzanna Mistal, project director for the new museum. "I was able to tell her yes. It was a beautiful feeling, and it was the first time I understood how important my work is."

Bookshop owner Zdzislaw is unlikely to hurry out to the museum when it opens, preferring instead his own memories of generations of Schindler survivors -- the ones he has watched grow up, traipsing in and out of his store year after year, and now bringing their own young ones with them.

Reprinted with permission from Jewish Journal, a Patheos Partner.